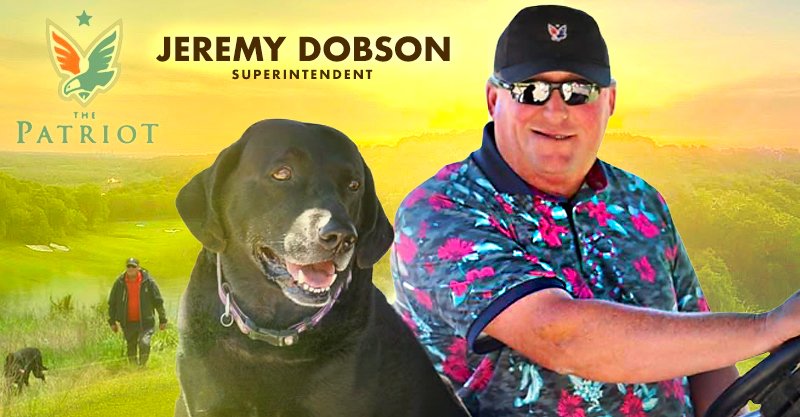 Dobson, 48, was killed in an auto accident Monday returning home from attending the Daytona 500 auto race with friends from his hometown of Arkansas City, Kan. The accident occurred near 11:30 a.m. on Interstate 295 northbound near Jacksonville, Fla., according to a story on a Jacksonville television website.

Dobson was one of two men thrown from the recreational vehicle which flipped over after striking a car. He died at the scene. The other two passengers and the driver were treated for injuries but no specifics were reported.

Dobson was one of the most deeply respected superintendents in the nation by those who knew and worked with him. He was an assistant at Southern Hills Country Club from 1998 until taking the job with The Patriot in 2008, two years prior to its opening. He was the first hire of then Director of Golf David Bryan, who now holds the same role at Cedar Ridge CC and had worked with him at Southern Hills.

“I knew Jeremy would be good and he was better than I could have imagined,” Bryan said. “He was so devoted to that place, it was his baby. And he was incredibly talented.”

Southern Hills superintendent Russ Myers counted Dobson as one of his best friends and most trusted advisers.  He was devastated by the news.

“It’s really, really hard,” Myers said. “Jeremy was one of my best friends and someone I completely trusted. It’s hard for people to understand just how good he was at his job and the incredible amount of respect he had from everyone he came in contact with. He’s iconic at The Patriot, part of the fabric and the culture.”

Brinkman worked side by side with Dobson from 2008 until 2019, through floods, tornados, ice storms, devastating wind and the unique challenges of a course built on a mix of canyons, prairie and deep woods.

“Jeremy had a brilliant agronomic mind,” Brinkman said. “And he didn’t pull it out of a book, he just understood the science. He was incredible to watch. We took every punch that beast of a course threw at us and he would come out on top every time. It was magnificent to watch and learn from hm.

“I know he’ll be remembered for how brilliant he was at his job, but he also was a beautiful person. He had a loving spirit and would do absolutely anything for you. That’s what I’ll miss the most. The people who really knew him understand that.”

Neidel was the GM from 2013-19 anda business director, membership director and events director prior. She said Dobson was part of The Patriot family that worked so hard to establish the new Owasso club, the only new facility to be built in Oklahoma in the past 14 years.

“There wasn’t anybody who loved that place and knew more about it than Jeremy,” Neidel said. “He was wildly talented, but a hard man to give a compliment to. He was always there for all of us as a family in trying to find the right path for this new club. It was a passion for him and he put it all on his shoulders.

“When it came to agronomics, he was the most talented I’ve ever seen,” Vest said. “He was such a unique guy, so humble, honest and truly believed in what the power of hard work could do. We always had the best greens in the state here yet you would never here him brag about them, there was always improvement to be made.

“He loved a good steak and a beer with his co-workers and friends.  He was a man of few words and not one to dole out the praise, but his philosophy was to keep working hard and you’ll earn respect. At the end of a big event, he would go up to each of his guys, shake their hand and say thank you, and that’s what he did for me when I left. He meant so much to me.”

Sezgin was at a club manager’s meeting in San Diego when he learned of the horrible news.

“I’m still in shock and denial” he said between flights home Tuesday. “Jeremy built that place. There was no golf course when they hired him. I’ve lost a friend I could rely on and trust and stop to talk with every day and plan on how to get through the challenges ahead.  What he meant to the staff and the members is beyond words.”’

Long-time friend and fellow Arkansas City native Chris Wilson, who worked alongside Dobson at Southern Hills and now is the director of grounds at Los Angeles Country Club, where the 2023 U.S. Open will be held on the North Course, has been grieving for his friend since learning the terrible news.

“Jeremy had a positive impact on everyone and everything he touched,” Wilson said. “He was one of a kind and made the world a better place.”

David Nowland, the owner of True Turf Technologies and also a member at The Patriot, has worked closely with Dobson since the club opened. He said the membership is generally in shock, knowing it won’t see Dobson and his faithful lab Royal tending to the fairways and greens.

“Members are always asking me, ‘we’re really lucky to have him, aren’t we,’ “ Nowland said. “They wanted to make sure that we never let him go.”

Brady Finton, superintendent at Tulsa Country Club, worked with Dobson at Southern Hills briefly when Dobson was just starting and had kept in touch ever since.

“He was one of the most hard-working, dedicated employees I have ever worked shoulder-to-shoulder with,” Finton said. “He gave it 150 percent every day. He was a quiet man, but old school. When he shook your hand he looked you straight in the eye and you knew he meant what he said.”

“We’re all going to miss him. It’s such a sad situation.”

Myers said Dobson was the man who convinced him to resod green surrounds and hillsides last spring prior to the Senior PGA Championship when he wanted to allow more time for the Bermuda grass to green up after a severe February cold snap.

“He said, I know you don’t want to hear this, but I’d be sodding this right now,” Myers said. “I wanted to wait, but that’s how much I trusted him. And he was right.

“He had already signed up to work every day of the PGA Championship (the week of May 19-22 at Southern Hills). I was looking at the schedule yesterday and planning to call him and say, you really aren’t planning to be here all week? But of course he would have been. That’s just how he was.”

Dobson, who was a bachelor, is survived by his parents and two sisters. A memorial service open to all will be held at The Patriot on Monday, March 7 at 12:30 p.m.