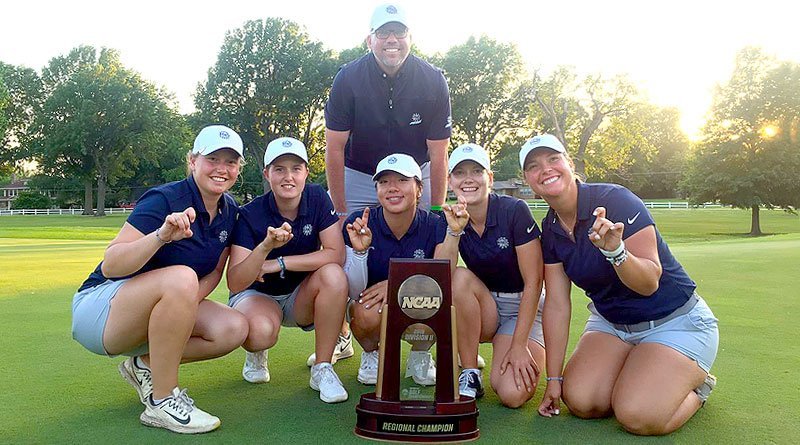 MUSKOGEE, Okla. – For the first time in program history, the Southwestern Oklahoma State women’s golf team won the NCAA Division II Central Regional Championship by climbing three spots on the leaderboard over the course of two rounds on Tuesday at Muskogee Golf Club.

With the win, SWOSU advances to the NCAA Division II National Championships for the second time in program history and first since they finished as the regional runners-up in 2014. The Lady Bulldogs will now represent the Central Region at the National Championships, which will take place on May 14-18 in West Palm Beach, Florida. Also earning a berth was Northeastern State, which finished third.

SWOSU entered the day in fourth place, but quickly started ascending up the leaderboard in the second round. All four scores counted in the second round were 74 or better for a team total of 291 strokes, which allowed the Lady Dawgs to move into second place and within striking distance of the lead heading into the final round. SWOSU kept the low scores coming in the final round, carding scores of 73, 73, 75 and 76 to overcome Arkansas Tech and win the tournament by four shots.

Gloria Choi led the Lady Bulldogs with a second-place finish at five-over par for the weekend while Elin Wahlin (sixth) and Chloe Thackeray (seventh) also placed in the top 10. Jenna Eidem tied for 23rd place with two rounds in the 70’s and Veronika de Bochdanovits had two rounds in the 80’s but rebounded with a 73 in the final round which helped SWOSU complete their comeback on Tuesday.

With its third-place finish on Tuesday, Northeastern State will advance to national finals for the first time since 2016.  The RiverHawks carded a three-round total at 913 (302-304-307).

Due to the significant threat of heavy rains, overnight on Tuesday, the tournament shifted to a two-day event with teams playing 36 holes.  Two of those teams would go 39 with three playoff holes being played to decide the final transfer spot to the National Finals

Teams advancing along with the RiverHawks will be Southwestern Oklahoma, Arkansas Tech, and Central Missouri.   UCM needed three tiebreaker holes to best Minnesota State and the darkness to advance.  Arkansas Tech’s Peerada Piddon is the Central Region’s Individual Champion after scoring a 216, and winning by two strokes.

The nation finals appearance is the ninth for NSU with the RiverHawks traveling to Palm Beach, Fla. to make up a field of 16 teams who will vie for a National Championship on May 14-18.