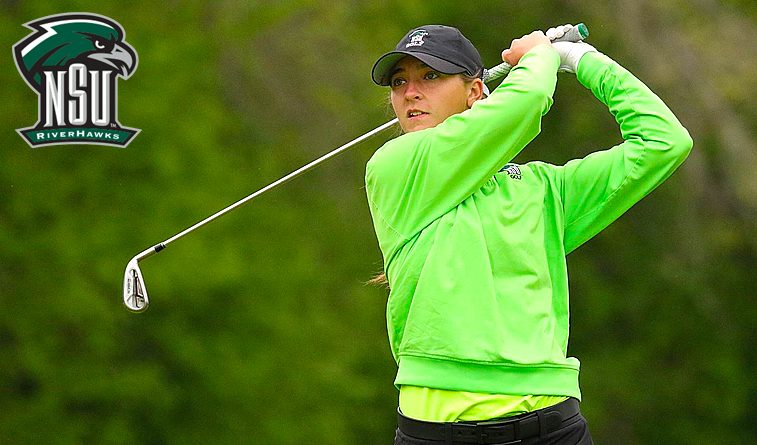 Wahlin is tied for first, while Gloria Choi and Chloe Thackeray are tied for fifth after both opened with 75. Emily Folsom shot 77 and is tied for 11th.

Defending champion Northeastern State is nine shots back at 310 and in third place.  Kelsey Lumpkin paced her squad with a 76, which is two shots off the lead, and tied for ninth place; Lexi Armon is a shot back with a 77.

Sumie Francois shot 78 and Ebba Moberg 79 for the Riverhawks.

Marla Souvannasing is tied for the individual lead and Central Oklahoma is fourth in the team standings. Souvannasing fired an opening-round 74 and Anna Pool added a 75 as the Bronchos finished with a 312 total.  Southwestern Oklahoma leads the 18-team tournament at 301, followed by Arkansas Tech (308), Northeastern State (310), UCO and Missouri Western (317).

“Marla and Anna both played really well today and they definitely carried us,” head coach Michael Bond said.  “Our other three girls struggled a little bit, but we’re still in position to win the tournament if everybody performs like they’re capable of tomorrow.”

UCO’s other three players all shot in the 80s, with Sydney Roberts carding an 81 while Makena Mucciaccio shot 82 and Yuna Sato 83.

Souvannasing is in a four-way tie for the individual lead after her two-over 74, making 13 pars and two birdies during her round.  The senior standout will be gunning for her school-record ninth career tournament win Tuesday.

Pool tied the opening-round lead in birdies with four in shooting her 75 and is fifth in the medalist standings.