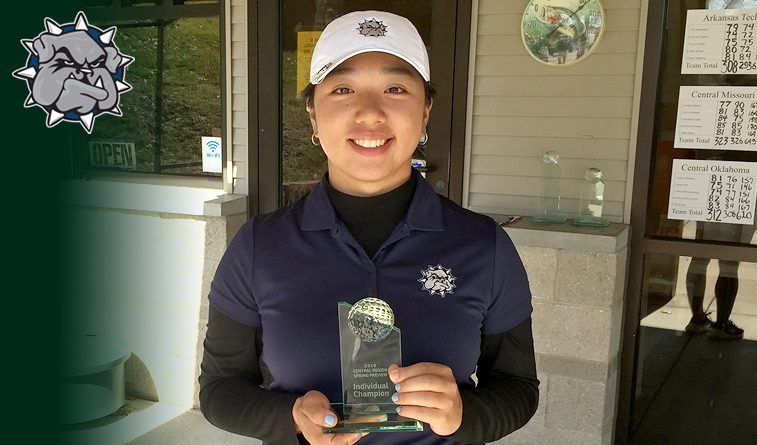 Photo: Gloria Choi tied for the individual championship and shot the lowest score of any player in any round in the tournament.

SWOSU took a seven-shot lead into the final day but shot 314 despite Choi’s final-round 71, which matched Pool for the lowest round of the tournaments. Elin Wahlin and Emily Folsom each shot 80 Tuesday to finish tied for 13th and tied for 20th, respectively.

Arkansas Tech had four golfers finish within the top 10 and shot just 5-over in Tuesday’s final round to collect the runaway victory.

Ebba Moberg shot the RiverHawks’ low round of the day with a 74 and finished tied for tenth place overall.  The NSU junior earned her 13th career top-10 finish carding a 153.

“We didn’t win, but for the third tournament in a row we were in the leader group with the tournament on the line on the final day,” said NSU coach Scott Varner. “We were balanced in our scoring, with four girls in the top-20 out of about 100 players and 18 teams.”

The RiverHawks were the top finishing team of the eight completing out of the MIAA which Varner and company hopes will carry on to the conference tournament in two weeks.

“We should be the favorite to defend our MIAA title for the third year in a row,” Varner said.  “We have won eight tournaments over the last two years and this is essentially the same team. We know how to win.”

Pool’s round of 1-under 71  led Central Oklahoma to a fourth-place finish. The Bronchos closed with a 308 to finish the two-day, 36-hole tournament with a 620 total.  It was the sixth top-four finish in 10 tournaments for the Bronchos this year.

Central had three players break 80 in the final round as Sydney Roberts shot 76 and Marla Souvannasing 77 in addition to Pool’s 71.  Makena Mucciaccio and Yuna Sato both shot 84.

“Anna had a great round today and really carried us,” head coach Michael Bond said.  “She was on her game and made a lot of big putts.  It was a good tournament for us and now we’ve got a couple of weeks to get ready for conference.”

Pool made 10 pars, five birdies, two bogeys and a double bogey in closing with the 71, tying her career best score.  The sophomore standout finished with a two-over 146 total in winning her first collegiate title, sharing the crown with two others.

Souvannasing had 14 pars on the day and finished with a tournament-best 27 pars in tying for sixth with a 151 total.  Roberts tied for 20th at 157 after her closing 76.

UCO is off next week before going to Kansas City, Mo. April 23-25 for the MIAA Championships.