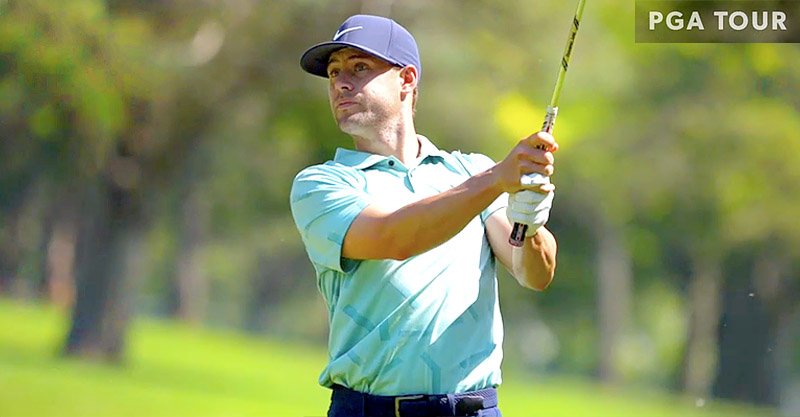 WICHITA, Kan. – Two players at opposite ends of the Korn Ferry Tour spectrum share the 18-hole lead at the Wichita Open Benefitting KU Wichita Pediatrics. Kevin Lucas and Edmond Memorial graduate and former state champion Taylor Moore carded matching 7-under 63s and lead a group of nine players at 6-under par by a single stroke.

Moore turned to the front nine at 3-under par and reached 7-under par with back-to-back eagles at the par-5 second and par-4 third. The San Angelo, Texas native went driver-7-iron into No. 2, then drove the 343-yard third and canned a 40-footer. Moore’s round Thursday morning was his 297th on the Korn Ferry Tour, and it marked the first time he made multiple eagles. It also marked the ninth time during the 2020-21 season a player made back-to-back eagles.

“I don’t know if I’ve done that ever,” Moore said. “That was pretty fun. Birdied the next hole and fed off those two eagles.”

Moore, who is the title sponsor of the Oklahoma Golf Association Junior Amateur Championship, bogeyed the par-4 sixth, which played as the toughest hole of the day, and settled for the seventh 63 of his 91-start career on the Korn Ferry Tour, with the most recent 63 coming at the Veritex Bank Championship this past April.

Not much else has gone wrong for Moore as of late. Prior to last week’s missed cut at the BMW Charity Pro-Am presented by SYNNEX Corporation, Moore had a streak of nine consecutive top-25 finishes which dated back to March.

“Once I missed the cut last week, I just put it behind me and got ready for this week,” said Moore, a University of Arkansas alum. “Didn’t really think too much into it. Just had an off week on the greens. I’ve been in a good space mentally, hitting a lot of good golf shots, doing a lot of good things.

“I think I’ve grown up a lot since I first turned pro and have been on this tour – on and off the golf course. I think it keeps me even-keeled. I’m in an emotionally good spot as well. I’m able to take a step back and make really good decisions when it’s going well, or if I’m in a spot that is a little bit tricky. That’s big for me.”

Moore’s recent run of outstanding play took him to 20th in the 2020-21 Korn Ferry Tour points standings, while Lucas has struggled to get anything going after a season-opening T6 at the 2020 Country Club de Bogota Championship last February. Lucas made the cut in just three of his next 20 starts and plummeted to 156th in the points standings.

The leaderboard is chock full of players with Oklahoma ties. By early Friday Oklahoma graduate Michael Gellerman had surged into the lead at 10-under after a 4-under start through 7 holes. Josh Creel of Edmond and former Sooner Garret Reband had moved into a tie with Moore at 7-under. Austin Eckroat of Edmond was tied for seventh after playing his first round in 6-under 64. Former Cowboy Peter Uihlein was tied for 22nd at 4-under, while Mason Overstreet of Kingfisher and OSU grad Kevin Dougherty were tied for 32nd at 3-under.

Other players with state ties to keep an eye on include Tag Ridings, Rhein Gibson, Grant Hirschman and Quade Cummins, all at 68; Max McGreevy (70), Charlie Saxon (70) and Tyrone Van Aswegan (73).