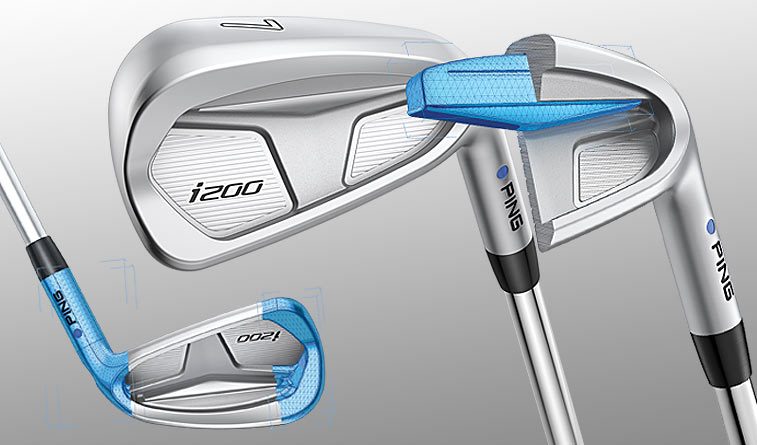 Right out of the box the new Ping i200 irons make a positive impression. They look great, like an iron should look, with almost classic lines and this makes sense since Ping intends them to be “shot-makers” irons. They are targeted for use by recreational players wanting a cleaner look with less offset than a game-improvement iron such as the Ping G.

Before getting in to the technical side of the i200s a big part of the first impression they make is their finish…a soft chrome look called “hydropearl.” Eye pleasing to say the least and functional too, which we will cover in a minute.

The i200 story revolves around three features. In the back of the head is a muscle-stabilizing bar to aid shot control and produce the nice smooth contact inherent in the irons. Second is an elastomer insert in the cavity behind the face that helps the face flex and dampen impact vibration. The insert is almost double in volume from previous models which means it is in contact with three times the area of the face.

Finally, the clubface is thinner so it is more reactive but equally important the saved weight from the face Ping was able to move towards the toe and into the hosel so it contributes to more forgiveness. There are some nice smaller features as well, such as the look of minimal offset at address which some, myself included, find is confidence inspiring. This of course won’t fix any swing faults but for me, if an iron sets up well that’s a positive factor in making the ball go where it should.

The blades leading edge has been given slightly more contour and a little more bounce was added so turf interaction improved meaning shallower divots and better ball contact. Finally, even the hydropearl chrome finish has a second purpose beyond making the i200s look good, it actually repels moisture which helps to minimize flyers from wet grass and rough.

On the course, few irons we have tested felt any better right from the first swing. Short irons were extremely solid and trajectory control was easy especially when trying to knock it really close from inside 150 yards.

Distance was no problem though the short irons were 2-3 yards longer compared to my previous set relative to the distance comparison of the longer clubs. Or put another way a Ping i200 9-iron generally went farther than the 9-iron I had been using but the Ping i200 5-iron was the same carry distance.

Street price is $125 per iron with steel shafts so a set of 5-iron through pitching wedge is $750.

Negatives: Surprisingly and considering the soft feel of most shots, some strikes felt very hard on the face. Granted it was always when the swing was poor and contact poor, usually towards the heel. It didn’t happen with every bad swing, but when it did it was almost startling given the usual smooth contact. Longer irons tended hit the ball somewhat higher and living in Florida where the wind often blows, a lower penetrating flight is useful. This was not a major problem but definitely one to be aware of for shots into the wind.

Recommendation: Anyone wanting for irons with the look and performance of player’s iron but the playability of a game-improvement club should jump on the Ping i200s. They answer both requirements admirably.