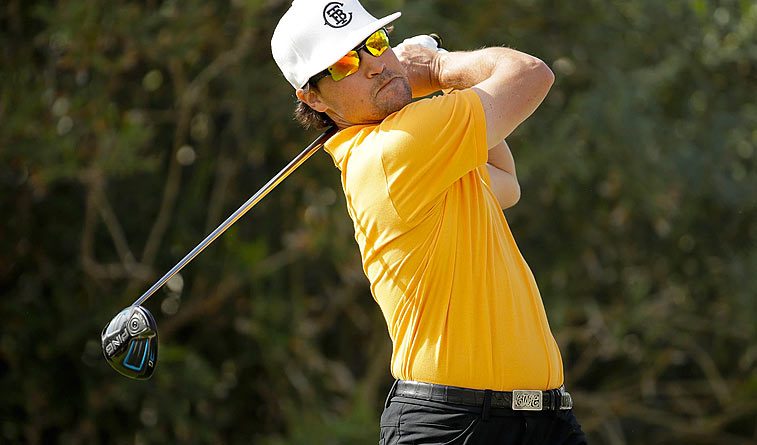 BROUSSARD, La. – It’s been close to five years since Casey Wittenberg has entered the winner’s circle. The 32-year-old former Oklahoma State golfer from Memphis, Tennessee, carded a final-round, 2-under-par 69 to end the drought and hoist the trophy at the 26th annual Chitimacha Louisiana Open presented by NACHER, his second win at Le Triomphe Golf & Country Club.

Wittenberg’s 21-under-par 263 total is the second lowest 72-hole total in tournament history. In 2012, he set the tournament record at 24-under-par 260 in his maiden Web.com Tour win, collected a second trophy in Kansas, won the money list and earned Player of the Year honors.

“In a weird way, it’s been a long time; you never forget how to win,” said Wittenberg, who moved to No. 5 on the money list. “You recall back on those moments when you did win in the past, but this one is maybe a little more special for me. I’m married now, I wasn’t married before. My dad was here; it’s fun to have them around.”

When Wittenberg graduated from the Tour in 2012, he had the chance to play with Tiger Woods in the final group on Sunday at THE PLAYERS Championship the next year. Woods went on to win and Wittenberg finished tied for eighth in one of the five biggest tournaments in the game with the world watching. Unfortunately for him, that was his only top-10 of a rookie season on the PGA TOUR where he lost his card.

Fast forward to 2016 at the WinCo Foods Portland Open presented by Kraft Heinz, where Wittenberg entered the week on the outside of the top 75 on the Tour money list. Needing a par on the 72nd hole to secure his Tour card and earn a berth in the Web.com Tour Finals, the former U.S. Amateur runner-up made a triple-bogey seven on the home hole after an untimely miscue off the tee to end the Regular Season No. 76.

“That was disheartening,” said Wittenberg, who needed a par to qualify for the Finals. “I knew I was on the number, my partner hits it out of bounds right in front of me and I pulled it in the hazard right off the tee. It’s golf, you’re going to make mistakes, it’s disappointing, but all in all I was fortunate enough to get in the first couple of events (this year), and come back here where I’ve played good.”

“I’ve had some good work over the last few months” Wittenberg continued. “My game was trending up. I can’t say I was expecting this, but I knew I could keep the ball in front of me, I was starting to have a little more control with it, and I did some good things this week.”

Wittenberg’s road back to victory lane was full of twists, turns and even a few hazards. With the support of his family, especially his wife Haley, the 13-year pro worked hard on his game with the help of instructor Scott Hamilton. The duo has resurrected Wittenberg’s game and given the two-time Tour graduate reason to be excited about the remainder of the season.

“Professional golf’s funny; we’re always trying to get better,” said Wittenberg. “I tried to maybe go down a path to improve my golf game, and hindsight’s 20/20, it probably got a little worse, then I got hurt and I couldn’t work on my game. All that kind of snowballs on top of each other. I wasn’t able to spend time with it, I wasn’t playing any good and I didn’t like it.”

“Scott Hamilton has really brought me back to the forefront here,” Wittenberg continued. “When I went to see Scott about a year and 4-5 months ago, I was pretty close to, not hanging it up, but I wasn’t playing good enough to even be competitive. It was frustrating, (and) Scott has really helped me.”

Wittenberg’s last win came in June of 2012 at the Air Capital Classic presented by AETNA. In professional golf, five years between wins can seem like an eternity. Wittenberg hopes to have more success this season and earn his TOUR card this summer in Portland.

“I probably can’t take another five-year stall and keep doing this for a job,” said Wittenberg. “Hopefully I can kind of snowball this into some better golf.”