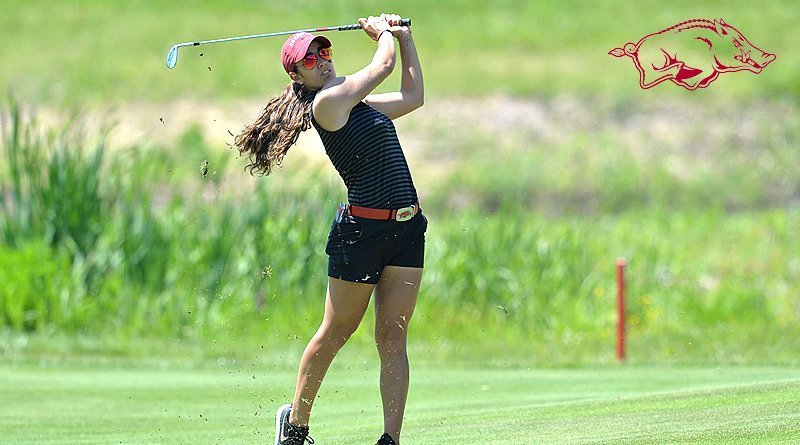 FAYETTEVILLE, Arkansas – Texas and Arkansas each carded a 302 to lead the field by two strokes after the first round of the NCAA Division I Women’s Golf Championships, hosted by the University of Arkansas at Blessings Golf Club (par 73 – 6,397 yards).  Arizona’s Bianca Pagdanganan leads the individuals by three strokes with a 4-under-par round of 69.

Texas was the clubhouse leader and was led by Emilee Hoffman (T-2nd at -1) and Agatha Laisne (T-13th).

“I’m happy with our team’s start today,” said Texas head coach Ryan Murphy. “We survived a little bit better than everyone else out there.”

The University of Oklahoma’s Kaitlin Milligan, who qualified as an individual, shot 81 and is tied for 81st.

The Razorbacks, playing in the final group, made a late charge to tie the Longhorns as Maria Fassi (T-2nd at -1) birdied holes 16 and 18 while Kaylee Benton (T-5th at +1) birdied 18.

“I thought everyone was a little nervous out of the gate,” said Shauna Taylor, Arkansas’ head coach. “We haven’t played at home since 2012, and it was a very difficult day out there but I’m super proud of our group. I think we finished incredibly strong and put us in a good position. We want to represent Razorback nation well and have fun doing it, and we have a special group out there. We’re just going to take it day by day and shot by shot.”

The Blessings lived up to its reputation as one of the nation’s most difficult golf courses as no team broke 300 and 66 of the nation’s finest collegians in the field of 136 failed to break 80. By contrast, at Karsten Creek in 2018, also a fearsome layout, six teams shot under 300 in the first round and only 38 players did not break 80.

The second round of the championships at Blessings Golf Club will tee off 15 minutes earlier tomorrow at 7 a.m. CT, with Southern California, Texas and Duke on No. 1 and Arizona, Kent State and Wake Forest on No. 10.