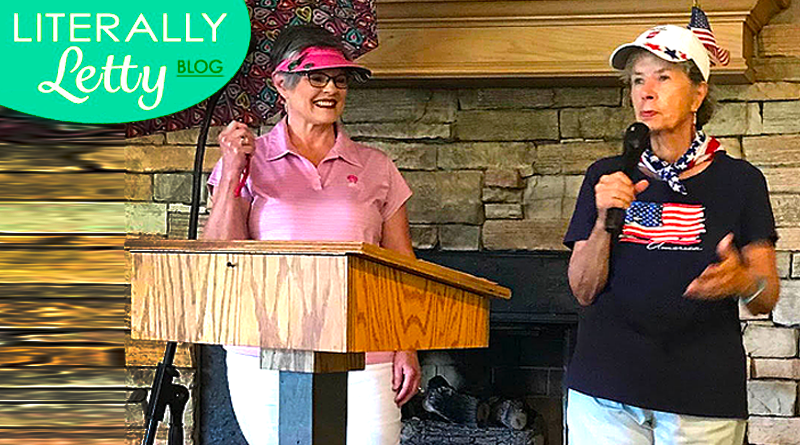 May 20,21 were the due dates. Dawn and I were co-chairs for the Women’s Oklahoma Golf Association’s Senior Championship to be held those two days at the Trails Golf Course in Norman.

We were prepared, our ducks were lined up, even though they were everywhere on the golf course.

My two singing friends and I had prepared for the greatest debut in golf to be held this close to the Canadian River.

My golf game had not improved this spring, but I held high hopes that my game would show up for the tournament and allow me to win the Super Senior Championship ( remember this song…She had high hopes ) BUT

On Sunday, May 19 the  National Weather Service predicted that Monday would be a level 4 danger for tornadoes and dastardly storms, SO we postponed this thrilling championship until June 24-25, and of course, the rains didn’t let up for a month.

Another month goes by with preparations ready, lists and volunteers ready, The Sub Par Trio ready, but Not my golf game. The rains stopped, the sun came out, the temperatures were in the 80’s, and we played our first round of golf on June 24.

This year we added a featured called “The Tin Cup Challenge” a simply 50-60 yard chip shot over water in front of people watching. For a mere $10 a lady could take two chances of getting closest to the hole and winning money with half of the money going to our junior girls scholarship fund. You could either laugh or cry at the shots taken that day. We choose laughter and memories.

With a touch of Tim Conway humor (click link to watch  Dorf on Golf with Tim Conway)  playing on the television in the grill after our first round of golf, and while we were piling our plates with food from the buffet we watched and laughed at some old golf humor, after all we are all Seniors.  With dinner nearly over, the golfers were restless, and the show was ready to go.  With Pam Harrell on the piano, Terri Street lead singer and comedian, and support provided by Letty Watt the show began.

As a tribute to Mabel Hotz, Hall of Fame Oklahoma lady golfer and mother of the Oklahoma Junior Girls State Championship (1950’s, 1960’s), we sang a rendition of “Oklahoma”, and “Oh, What a Beautiful Day” combining her rendition and mine.

Imagine, in nearly perfect harmony as we sang “Oklahoma”:

Oklahoma, where the women golfers love to play
And we sure have fun, beneath the sun,
Even though it rains most every day…..

A creative refrain from “Oh, What a Beautiful Day”;

Oh, what a difficult golf game, Oh, what a fabulous shot.
I sank a long putt on eleven, everything’s going my way…….

Terri topped off the night with her lyrics, adapted from “It’s Ruff Being a Dog” by Phyllis Wolfe:

At the end of day two we proved the lyrics and the poetry to be correct.

Thanks to all of the staff at the Trails Golf Course, all of our volunteers, and especially to the ladies of WOGA for making this Senior Championship a success.