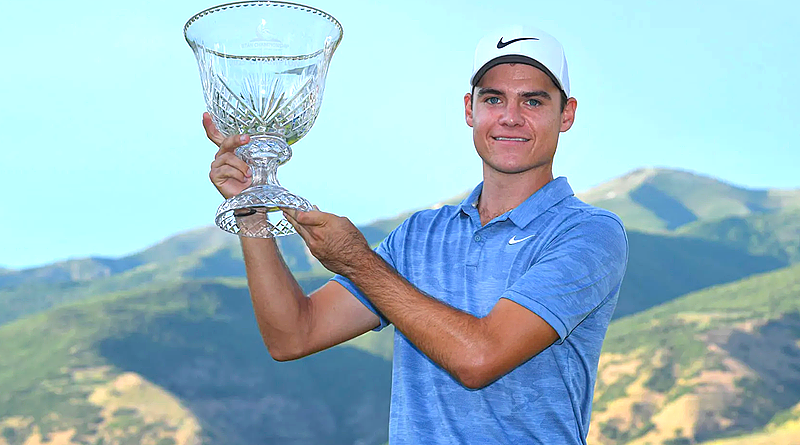 “This is unreal and I’m really happy to be in this position,” Ventura said. “I did everything I could before (the playoff) and I just figured if someone is going to win, I’ll try my best. As long as I do that, I’ll be happy afterwards. Obviously, it turned out to be pretty good.”

In addition to the Ventura and Creel, Oak Tree National member and former Oklahoma Sooner Charlie Saxon of Tulsa tied for third with former OSU golfer Kevin Dougherty and Ryan Brehm at 13-under. Former Oklahoma City University golfer Tyrone Van Aswegan tied for 14th at 9 under.

Both Ventura and Creel made par on the first two playoff holes. On the third extra hole, Creel’s par attempt lipped out, leaving Ventura a 3-footer for par to secure his first Korn Ferry Tour title. With the victory, Ventura earned 500 Korn Ferry Tour Points and moved to No. 17 in The 25.

“Being on the PGA TOUR has always been a dream of mine,” Ventura said after his victory. “I’ve gotten a taste of it. It’s been my goal this whole time. Now I’m a little closer. But next week is a new week and I’m going to keep doing what I’m doing and trust the process.”

“A few weeks ago, I got an invite to the BMW Charity Pro-Am and finished in a tie for third there, and after that I was able to plan my schedule and that was the biggest thing for me,” he said. “Before that, I was playing Monday qualifiers and that was pretty tough mentally. To be in this position now, it’s incredible.”

Ventura was a standout at Oklahoma State University before turning professional in 2018. He played alongside teammates Viktor Hovland and Matthew Wolff, who both have experienced early success on the PGA TOUR. Hovland fired a final-round, 8-under 64 at the Rocket Mortgage Classic to finish T13 on Sunday. Another former Cowboy and OTN member Talor Gooch tied for 17th at 14 under.

Ventura noted that he and his teammates have always been competitive, and that he even received some inspiration from his former college coach Alan Bratton.

“Viktor played really well today, that was exciting to see,” he said. “Coach Bratton told me to get inspired by what Viktor did today and just go out there and have fun. That’s what I did, so I’m happy.”

“I’m a little disappointed, but I’ll take the positives from this week,” Creel said. “I think I locked up at least getting into the Finals, so that’s good. I’ve got a job for next year. I’m just going to keep doing what I’m doing, and hopefully my time comes.”