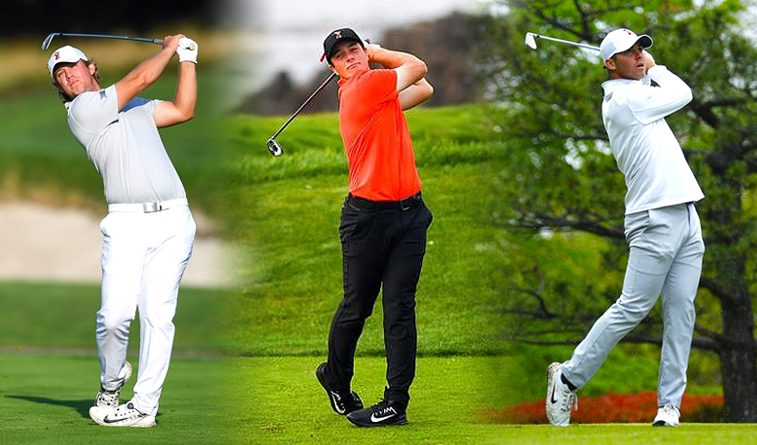 Three members of the Oklahoma State men’s golf team were named semifinalists for the 2018 Division I Jack Nicklaus National Player of the Year Award it was announced on Tuesday by the Golf Coaches Association of America with Zach Bauchou, Viktor Hovland and Matthew Wolff all receiving the distinction. Brad Dalke of the University of Oklahoma Sooners is also on the list.

Hovland and Wolff currently stand in the top 10 in the Golfweek/Sagarin Rankings, checking in at Nos. 5 and 6, respectively. Bauchou is currently ranked 16th.

A sophomore for the Cowboys, Hovland has six top-five finishes on the year, including a victory at the Valspar Collegiate. He also has a pair of runner-ups to his credit.

Wolff has tallied five top fives during his freshman year. In addition to three runner-ups he most recently finished fifth at the Big 12 Championship.

Bauchou has tallied four top-five showings during his junior campaign. Among those finishes are a trio of fourth-place outings.

The finalists for the award will be named May 24 with the recipients being announced on May 31. The honor will be presented by Jack Nicklaus at a ceremony during the final round of the Memorial Tournament at Muirfield Village Golf Club.

In addition to receiving the Jack Nicklaus National Player of the Year Award, the five recipients will compete in the Barbasol Shootout for an exemption into the PGA Tour’s Barbasol Championship, which is held July 16-22 at the Champions at Keene Trace in Lexington, Kentucky. The Barbasol Shootout will be held June 2 at the storied Scioto Country Club in Columbus, Ohio, the same club where Nicklaus first learned the game of golf as a young boy.