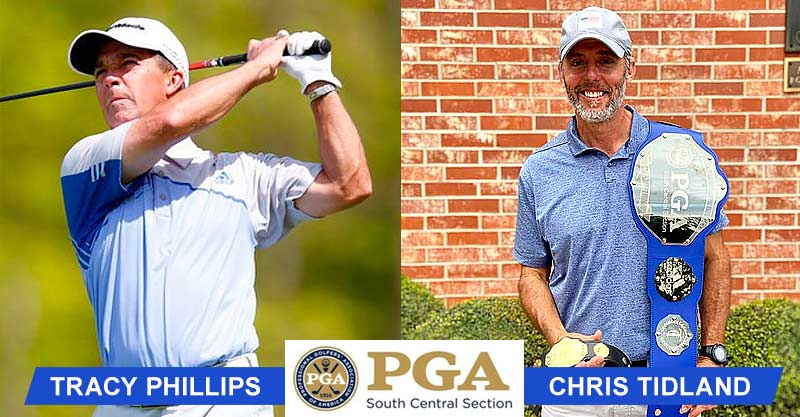 More than 60 section club professionals made the drive south to compete in the event. Tidland, an assistant at Stillwater Country Club and longtime professional competitor on various tours, had the best score overall, edging Andre Tourinho by two shots. Tourinho, a former University of Tulsa golfer, is an assistant at the Broken Arrow Golf and Athletic Club.

Complete results from all divisions can be found here. In the Regular Division, Brad Simons of Little Rock won a playoff with Brent Williamson of Sand Springs after both shot 1-under 71. In the Senior Division, Tim Fleming of Oklahoma City edged host pro Art Romero by a shot. Fleming shot 2-under 70 and Romero 71 while Brent Wilcoxen of Tulsa was third at 73. Rusty Wortham of Altus won the Super Senior Division, shooting 71 to even-par 72 for Vince Bizik of Grove.

Tracy Phillips of Tulsa last week raced past  Tim Fleming of Oklahoma City 9 and 7 in the 36-hole finals of the South Central Section Yamaha Match Play Championship at Southern Hills Country Club. Due to the pandemic, pros have been arranging matches at their convenience throughout the summer with the finals of both the regular division and senior division to play at Southern Hills. Phillips and Fleming advanced to the finals in both divisions, and will play their senior division final at a later date.

The match was all square through eight holes, but Phillips took command by winning six of the final 10 holes on the first 18, including with a birdie on the par-5 13th and an eagle on the par-5 16th.

In the assistants division final, Andre Tourinho won a decisive 12 and 11 match over Zach Tucker of Gaillardia Country Club in Oklahoma City.

Andre Tourinho of Broken Arrow Golf and Athletic Club and Chandler Rusk of Rose Creek Golf Club in Edmond are set to compete in the National Car Rental Assistant PGA Professional Championship at PGA Golf Club in Port St. Lucie, Fla., this Thursday through Sunday.
See much more info on the event at the official site here.
Facebook Comments