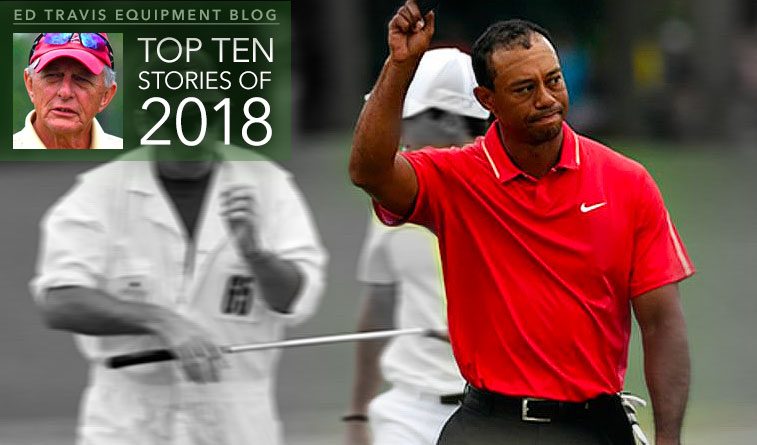 Year of the Tiger
Perhaps Ben Hogan’s come back to win six majors after a head-on collision with a bus was more amazing but Tiger Woods’ return from four back surgeries and other well publicized problems to win the Tour Championship is by any measure remarkable. Towards the end of 2017 the prognosis was he might never be able to play professional golf again much less at a championship level. However, he did come back competing in 18 tournaments and the Ryder Cup this year. Many fans are pulling for the soon to be 43-year old to continue his run at Jack Nicklaus’ record of 18 majors, Woods has 14. However, even if he never wins another tournament, 2018 will always be known as the year of the Tiger.

Ryder Cup
The U.S. lost again, this time in France by the embarrassing margin of 10½ to 17½.  Reasons advanced by the cognoscenti included poor captain’s picks, poor tee shots, poor putting and poor attitude. The real reason however is Team USA got just plain whupped by Team Europe. We played lousy and the Euros played great. Period. Until that changes American fans can only look forward to more of the same. The old saying applies, sometimes the simplest things are the hardest to do.

Rarely does a professional do something as inane as Phil Mickelson when he hit a moving ball on the 13th green during Saturday’s third round of the U.S. Open. The whole episode was ridiculous regardless of his excuse, rationalization, justification or reasoning if indeed any reasoning even existed at the time.

After the round Phil offered to withdraw if the USGA felt he had crossed the line of acceptable behavior, but they had already ruled he would not be disqualified. A social media frenzy erupted accompanied by the usual Olympian pronouncements from certain analysts. Lefty’s real problem was his frustration boiling over trying to complete a career grand slam on greens that had become unplayable. The USGA continues their flawed philosophy of the proper way to setup a course to hold a U.S. Open. The idea seems to be after checking on the predicted weather specify course playing conditions, primarily length of the rough and speed of the greens, to the very edge of playability. The problem arises when actual weather conditions don’t match weather predictions and the result is usually a disaster. The mavens of Far Hills thought they had it figured out Thursday at Shinnecock when the wind, 4-inch rough and thigh-high fescue made an extremely tough test even with the generous 41-yard average width of the fairways.

Thursday and Friday served to quiet the critics at least temporarily but Saturday afternoon their course setup philosophy caught up with them. Shinnecock greens were virtually unplayable for even well struck approaches and putts. The USGA issued a non-apology but they did nothing to mitigate the fact they had really messed up…again. In order to compensate, Saturday night the greens were heavily watered which meant for Sunday’s final round averaged an astonishing 3.2 strokes lower than Saturday.

Whaley to PGA President:
Suzy Whaley, after having stepped through the chairs, assumed the top spot of the PGA of America which represents the 29,000 dedicated Professionals running the nation’s golf courses and teaching us how to play. The PGA also runs two extremely profitable events. The PGA Championship which is one of golf’s four major championships and the Ryder Cup, the premier international golf competition.

Whaley, a top-tier player in her own right, is the first women to head the organization and has said she hopes to make golf more accessible and encourage more women to play. Those are noble ideals and for years along with juniors have been part of PGA outreach programs. It would seem a more germane goal for her two-year term would be finding a way to put some of the profits from the Ryder Cup and the PGA Championship into the pockets of the Association’s members.

“Table for One”
Patrick Reed, a.k.a. Captain America, made headlines and alienated lots of people when he blamed Ryder Cup captain Jim Furyk and teammates Jordan Spieth and Tiger Woods for his record of 1-2-0. His lone point came in singles when he didn’t have to put up with a partner. Spieth supposedly earned Reed’s anger because of his desire to break up their successful partnership from the 2016 Ryder Cup and 2017 Presidents Cup.

According to Furyk Reed knew at least two weeks ahead of time his partner would be Woods and said he was OK with the switch. In what has to be considered an unimaginable stretch of logic one commentator has said Reed will do for the PGA Tour as John McEnroe did for tennis—others have given him the nickname of “Table for One.”

Rules of Golf Modified
The USGA and R&A published a major redo of the Rules of Golf incorporating several important changes starting with the use of everyday language to replace the convoluted legalistic grammar and syntax of previous versions. Add to that there are now ten fewer rules and there may be a reasonable chance players will actually refer to the rule book after of course they replace the water stained version wrapped in a mildew covered rain jacket stuffed their golf bag’s outside pocket. We particularly like the modified Rule that prohibits caddies from standing behind players to ensure they are aimed properly, a common sight on the LPGA Tour. Lining up a shot is an integral part of golf and it’s not in the spirit of the game to use a caddie-cum-coach. Eighteen holes at Shadow Creek with Lefty beating Tiger on pay-per-view featured uninspired play and technical malfunctions but did show us three things. First Mickelson is $9 million richer and secondly, he and Woods have an entertaining rivalry. Number three is all the stick-in-the-muds who said they would “never pay money to watch” and the corollary “they should be playing for their own money” might consider getting a life…have some fun and can the sarcasm, cynicism and carping.

True the golf was not exactly Ben Hogan versus Sam Snead, but the overwhelmingly important point is The Match brought positive attention to golf from the usually less-than-attentive so-called mainstream media who still seem to believe it’s a game in trouble and played only by rich white guys. Legalized golf gambling is coming to a state near you after the Supreme Court ruled sports wagering regulation was up to individual states not the federal government. This raises the specter of unscrupulous people attempting to influence the outcome of PGA Tour tournaments and the Ryder Cup with tactics such as tossing a full beer cup at a player during his tee shot. Americans no longer consider gambling to be a moral issue as shown by all the state lotteries allowed usually under the guise of raising money for worthwhile things such as education.

Gambling gives states a stream of revenue not requiring an increase in taxes. Rest assured the PGA Tour is making plans to capitalize on legalized betting through rights fees or a similar toll on the state-approved bookies.

Shorter Tour Schedule:
The PGA Tour decided competing with football for the attention of fans doesn’t work so the 2018-2019 season ending FedExCup playoffs will finish before the NFL season starts. The PGA Championship is being moved from August to May where it replaces The Players which will be moved to March and there will only be three playoff events rather than four.

Tour commissioner Jay Monahan said, “This will enhance the visibility of the FedExCup Playoffs and overall fan engagement with the PGA TOUR and the game as a whole.” How fewer tournaments and therefore fewer playing opportunities will help “the game as a whole” is not clear but such quibbling is beneath us.