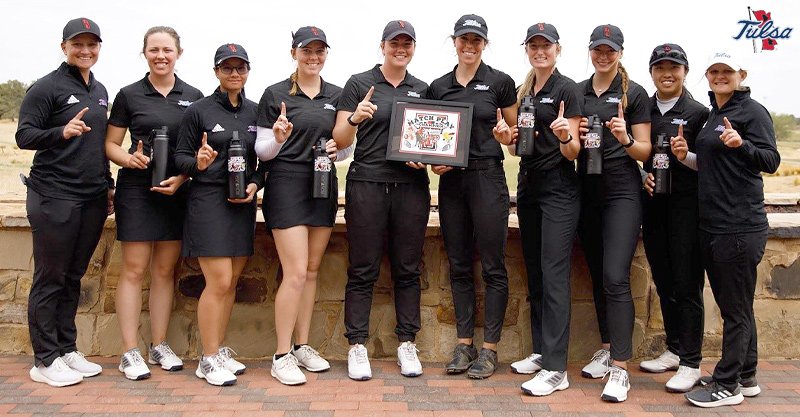 LUBBOCK, Texas –– Tulsa utilized a strong back nine Monday to top No. 20 Texas Tech, 3-2, in the finale of the Red Raider match play event at The Rawls Course. The Red Raiders closed the event at 2-1 overall after defeating both Oklahoma and No. 3 Oklahoma State on Sunday while upstart Tulsa went 3-0, also with victories over No. 7 OSU and OU Sunday.

Tulsa was 2-up in each of its three matches the Golden Hurricane won Monday, spoiling what was a great return to competitive golf at The Rawls Course. The tournament was the first one hosted by Texas Tech since the course was the site for the 2017 NCAA Lubbock Regional where the Red Raiders advanced following a fifth-place finish.

For Tulsa, Sophie Johnson prevailed 2 and 1 over Amy Taylor, Lorena Tseng defeated Kylee Loewe 2 and 1 and Lovisa Gunnar defeated Anna Dong 2 and 1. Tseng, who had been mired in a slump all spring, went 3-0 over the two days.

“Today obviously wasn’t the best round we have played this season, but it doesn’t erase how well I thought our team competed this week,” Texas Tech head coach JoJo Robertson said. “All three of these schools will likely be NCAA Regional participants, so it was a great stage for us to learn and improve as we head into the final stretch of our season. We’re thankful we were able to host such quality golf the past few days here at home.”

The Red Raiders managed two victories on the day as Chiara Horder closed out her match with Haley Greb at 3-up on the 17th hole, while Gala Dumez birdied the 18th to edge Lilly Thomas by one. Horder recovered to win her match after dropping each of her first two holes, winning the next two and then three more as part of the back nine.

Dumez, meanwhile, went back-and-forth throughout the day with Thomas, building a two-hole lead through the front nine before eventually trailing heading into the 16th. Dumez, though, was able to sink a key birdie at the par-3 16th and then followed with a strong approach two holes later for Thomas to concede the match on the 18th.

Dumez’ win at the 18th came after the Golden Hurricane after already locked up the match with three wins over the Red Raiders at the 17th. Two of those wins came over the Texas Tech duo of Kylee Loewe and Anna Dong, who entered the day undefeated for the tournament after victories over their counterparts from Oklahoma and Oklahoma State on Sunday.

Tulsa is back in action next week, Monday-Tuesday, at The Bruzzy in Denton, Texas.

No. 7 Oklahoma State women’s golf beat Oklahoma, 3-2-0, in the final round of the Red Raider Match Play event on Monday at the Rawls Golf Course in Lubbock, Texas. The match was tied at 2-2-1 down the stretch with three of the five matches on their final three holes.

Han-Hsuan Yu led the way once again for the Cowgirls as she defeated Oklahoma’s Mikhaela Fortuna, 1-up, to earn the first point in the match for either school to close out her undefeated weekend.

From there, Maddison Hinson-Tolchard won her match against Libby Winans, 1-up, after their match was tied through 17 holes to put OSU up 2-0 with the third match of the morning approaching its final two holes.

Third to tee off for Oklahoma State, Hailey Jones scored the winning Cowgirl point with her 2&1 victory over Meagan Winans to secure the 3-2-0 Bedlam win.

With the win, OSU improved to 3-2 on the year in match play and 6-4 over the past two years.

“After a tough day yesterday, it was nice to see them respond today with a win over OU,” head coach Greg Robertson said. “Especially in a close match where all of the matches came down to 17 and 18. It’s great to end the tournament with a win and something to build on as we get ready to head to into next week for our last regular season tournament.”

Angelica Pfefferkorn fell in her match to Maria Fernanda Martinez, 2&1, while Hannah Screen won Oklahoma’s second point with a 3&2 victory over Lianna Bailey.

The Cowgirls will return to action April 11 at The Bruzzy in Thackerville, Okla.