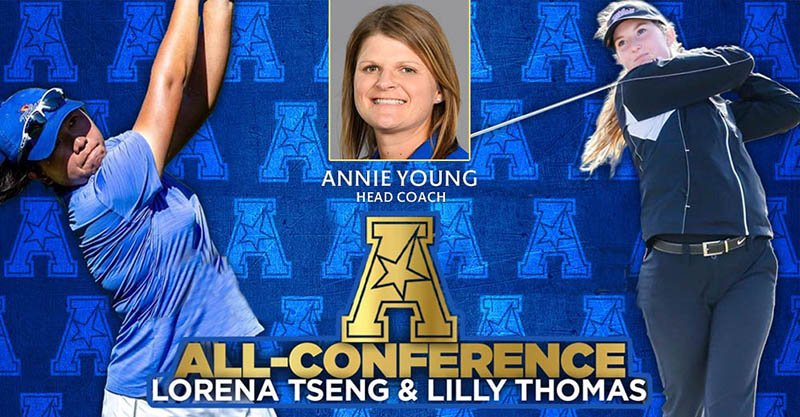 IRVING, Texas ––University of Tulsa women’s golf coach Annie Young was named the American Athletic Conference Coach of the Year and student-athletes Lorena Tseng and Lilly Thomas were named to the all-conference team, it was announced today by the league office.

The Golden Hurricane captured The American Golf Championship last week with a three-shot victory over two-time defending champion Houston. The Hurricane led from start to finish with rounds of 293-301-294 for a total score of 888.

On the year, Young has led her team to three tournament championships in five events, including the Texas State Invitational and the Rebel Beach Intercollegiate. She also has her team ranked among the nation’s top-50.

Tseng, a junior, earns her second all-conference award. She was also named to the all-conference team as a true freshman in the 2018-19 season. This year, Tseng has a 71.7 stroke average in 15 rounds and has posted a top-15 performance at all five events.  She placed second at the AAC Championship and the Texas State Invitational and had a fourth-place finish at the Rebel Beach Intercollegiate. Tseng is currently ranked 35th nationally in the Golfstat rankings.

In 24 career tournaments, Tseng has posted 11 top-5 performances and has 16 finishes among the top 10.

Sophomore Lilly Thomas was also named to the 12-member all-conference team for her first such honor. Thomas has posted a team second-best 74.2 stroke average in 15 rounds and has placed among the top-20 in three tournaments. She had a season-best third-place finish at the Rebel Beach Intercollegiate and placed 13th at The American Championship and 16th at the Texas State Invitational.

Tulsa will be in action next at the NCAA Regional, May 10-12. The regional site will be announced this Wednesday.