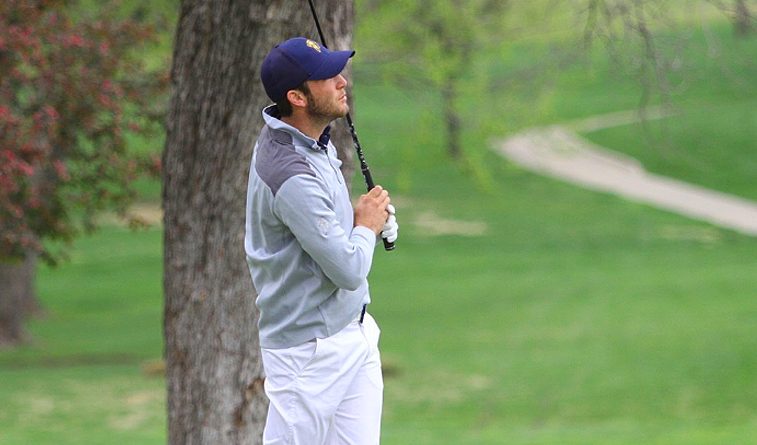 Temperatures in the low 40s with 30-35 mile per hour winds caused scores to soar and forced the cancellation of Monday’s second round, with UCO taking the lead after an opening round 300 at the par-70 East Course.

That’s good for a 13-shot lead over Arkansas Tech heading into Tuesday’s final round, which will start at 9 a.m.  Northeastern State is third in the 15-team field at 317, with UCO’s second-team and Harding tied for fourth at 318.

“I can’t say enough about how our guys played today,” head coach Josh Fosdick said.  “The conditions were extremely tough, but our guys were ready.  We had some great practice rounds out here last week.”

Hughes led the way with his amazing 69, which was a full 12 strokes under the 81.76 average posted by the 88-player field.  Eli Armstrong shot 74, while Wesley Jackson had a 78, Yannic Oppenheimer a 79 in his first-ever round with the Bronchos and Blake Berry an 83.

“Alexander Hughes had a phenomenal round today,” Fosdick said.  “In tough conditions when he needs to really get focused he tends to play well and he did that today.  He took advantage of his length on some holes when he was downwind on some occasions.”

Hughes certainly did that on the 10th hole when he drove the 374-yard par-4 and then drained the 20-foot eagle putt.  That got him back to even-par after he bogeyed two of his first four holes in the round, which started on No. 6.

Hughes had eight pars, three birdies and two bogeys the rest of the way to finish off the one-under round that has him one shot ahead in the individual standings.

Armstrong and Crago are tied for sixth.  Armstrong made two birdies on the day, while Crago’s round was highlighted by an eagle on the par-4 15th hole when he holed out a 5-iron into the wind from 157 yards.

Sam Stevens of Oklahoma State, playing as an individual, was a shot behind with a 70, while OSU teammate Brendon Jelley is fifth with a 73.
Facebook Comments