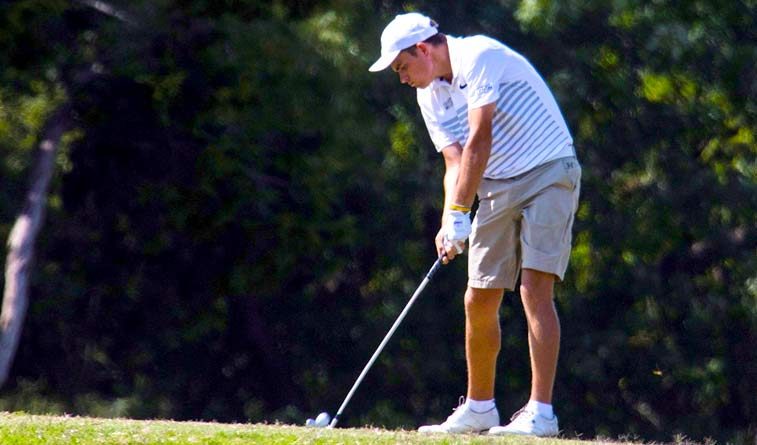 MONKEY ISLAND, Okla. (Oct. 24) – Tough final-round conditions sent scores soaring, but Central Oklahoma was able to handle the storm in cruising to a runaway win in the Missouri Southern Fall Invitational here Tuesday to cap off a dominating fall schedule.

The Bronchos entered the day with an 11-shot lead and extended that to 17 by the end of the final round after shooting a 301 at the wind-swept Shangri-La Golf Resort.  It was the low round of the day and gave UCO an 874 total after three trips around the rugged par-72 layout, with Missouri-St. Louis a distant second at 891.

Harding finished third in the 16-team field at 898, followed by Minnesota State-Mankato (910) and Southwest Baptist (917).

All five UCO players shot 79 or better when the scoring average was 80.8, led by Wesley Jackson’s even-par 72 that tied for the best round of the day.  Nick Pierce had a 75, while Eli Armstrong shot 76, Blake Berry 78 and Alexander Hughes 79.

“It was pretty tough out there today with the wind and the way the greens were rolling,” said head coach Josh Fosdick, whose team won two of five fall tournaments while finishing second in the other three.  “Our guys did a great job minimizing the damage today.  We made enough birdies to offset the bogeys and played well, especially considering the conditions.

“We got out to a strong lead yesterday and it was good to see us extend that today in the final event of the fall.  We played steady golf and to have everybody finish in the top 12 was great to see.”

Jackson spearheaded UCO’s balanced attack, coming in second in the individual standings with an even-par 216 total that was two shots behind winner Mason Banger of Harding.  Pierce was two shots back in third at 218, while Armstrong came in fifth at 221, Hughes 11th at 225 and Berry 12th at 226.

“It was a good way to finish the fall,” Fosdick said.  “It’s always good to see the little things we can improve on and still walk away with the trophy.  We’re excited about what we accomplished this fall and are looking forward to the spring.”