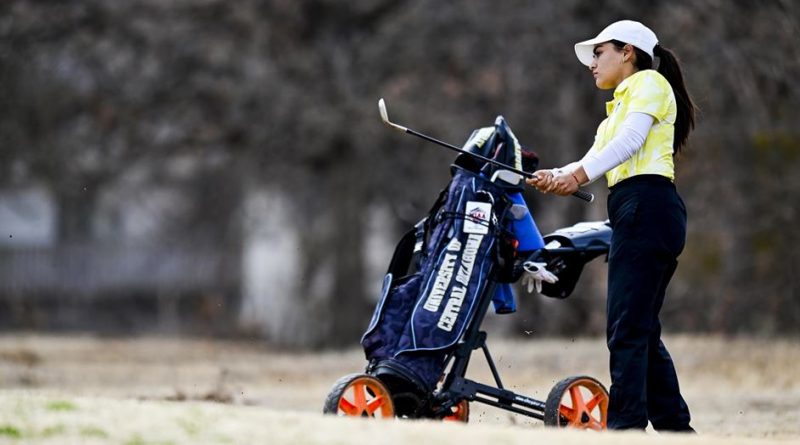 NEWTON, Kan. – Central Oklahoma had a trio of top-10 individual placers in a third-place finish at the Mid-America Intercollegiate Athletics Association Women’s Golf Championships that wrapped up Saturday.

Susana Olivares was the runner-up, while Madison O’Dell and Kinsley Hall tied for ninth as the Bronchos ended three trips around the wind-blown 5,960-yard, par-72 Sand Creek Station Golf Course with a 947 total after closing with a 318.

Steady wins of 35 miles an hour with stronger gusts again made it difficult on players for the third straight day. Only 11 of the 55 players broke 80 on the final day when the scoring average was 84.8.

Nebraska-Kearney cruised to the team title with a 934 total, nine shots ahead of runner-up Central Missouri. UCO was third in the 11-team tourney, followed by Rogers State (950) and Northeastern State (969).

“The wind these past three days has been as bad as I’ve seen and it definitely made things hard for everybody,” head coach Michael Bond said. “We battled, but just didn’t play well enough.”

Olivares fell short in her bid to repeat as individual champion, ending up three shots behind UCM’s Claire Solovic.

Named MIAA Player of the Year earlier this week, Olivares got off to a great start with a birdie on the par-4 first hole. She bogeyed Nos. 2, 5 and 8 in shooting a front-nine 38, then double bogeyed No. 10.

The sophomore standout responded with six straight pars before bogeying the par-3 17th and then finished with a par for the 77 that gave her a 227 total.

O’Dell was one-under after a birdie on the par-5 fourth hole, but double bogeyed No. 6 and bogeyed No. 7 in shooting a two-over 38 on the front nine. She opened the back nine with three straight bogeys before playing the last six even-par in coming back for a 39.

The Bronchos will find out Monday if they will receive an at-large bid into the NCAA Division II Women’s Golf Championships.

The Hillcats will now turn their attention to the NCAA Central Regional Championship which begins on Monday, May 2 in Hot Springs, Ark. at the Hot Springs Country Club.

For Northeastern State, Kaylee Petersen finished 2-under on the final eight holes to climb into fifth place at 233 (77-78-78) and was named All-Tournament Saturday. Northeastern State turned in a 333 and had a three-round total of 968.

The RiverHawks were second in the 11-team field with 146 pars but were limited to 14 birdies.

Northeastern State will await its NCAA Postseason hopes with announcements being released on Monday.