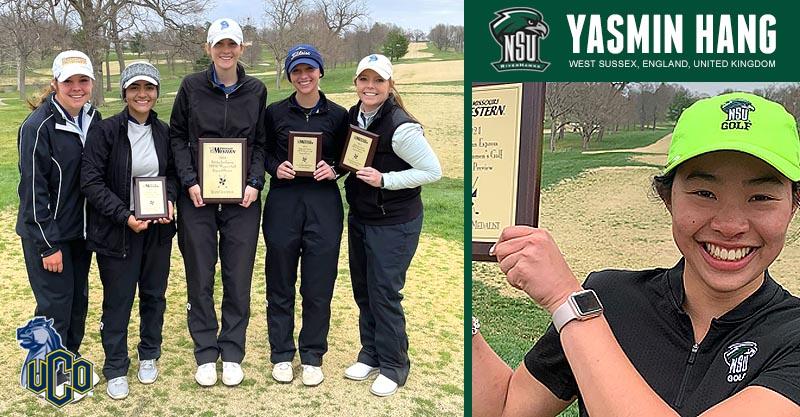 UCO carded a second-round 315 after posting a team score of 322 in Monday’s first round. Both were the lowest team scores in each round and Central’s 637 outpaced Northeastern State, which finished second, by nine strokes.

Emma Shelley and Sydney Roberts both tied for second place individually and Susana Olivares finished fifth. Madison O’Dell added a 27th-place finish to round out the counting scores for the Bronchos. Emily Miller was Central’s fifth and finished 43rd.

Shelley shot a 36-hole 156, carding rounds of 79 and 77. In Tuesday’s final round, she opened with a birdie on the par-3 fourth and added one more on the par-5 10th. Shelley registered 10 pars in her final round.

Roberts also fired a 36-hole 156, posting rounds of 76 and 80. Roberts had one birdie and nine pars Tuesday.

Olivares finished with a final score of 160, scoring 81 on Monday and 79 on Tuesday. She now has eight top-five finishes in her career after a second round that featured 12 even-pars got her into fifth.

For NSU, the RiverHawks have now finished third or better in all four tournaments played this spring and with this week’s event serving as a good test for the team with the St. Joseph Country Club hosting the NCAA Regional in May.

“We are very proud of the second-place finish; things could have been so much worse after our six-hole start today,” said head coach Scott Varner.  “This should give us great confidence about going to Michigan for the national finals.”

Southwestern Oklahoma State was paced by Mikaela Rindermann and Rebecca Lau, who tied for sixth at 162. Megan Brown placed 12th at 163.

Rogers State was led by Jessica Green , who also tied for sixth at 162. Mariana Flores tied for 31st at 169, while Sydney Murray, Marelda Ayal, and Jaelynn Unger all tied for 37tf in the individual standings.