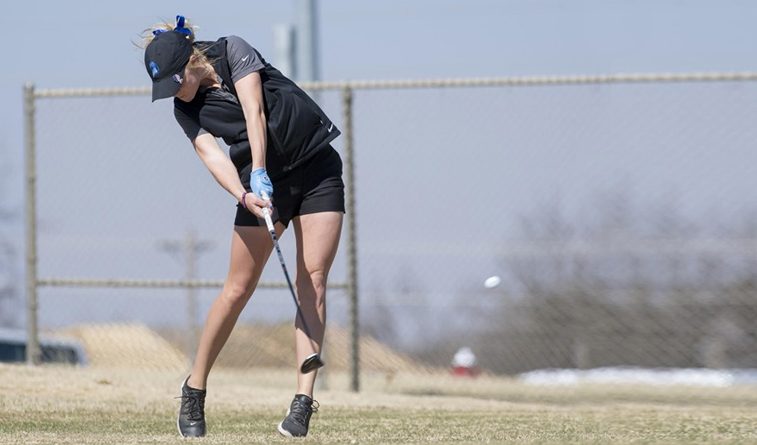 SIOUX FALLS, S.D. – Northeastern State carded its lowest round on Wednesday but four strokes separated the team from advancing to the NCAA Division II National Championships for the second year in a row.

The RiverHawks finished in fourth place at 934 (311-315-308) with Arkansas Tech, Augustana, and Henderson State as the top-3 teams whose season will continue.

Baylee Price and Kelsey Lumpkin tied for 13th for NSU. The tournament marked the end of a stellar four-year career for Price, who won MIAA Player of the Year twice and will go down as one of the top three players in NSU women’s golf history.

Pool shot a final-round 75 to finish the three-day, 54-hole tournament in sixth place with a 228 total.  That was good enough to earn one of three qualifying spots that went to individuals not on one of the first three teams.

The Bronchos closed with a 307 at the 6,073-yard, par-71 Minnehaha Country Club and came in fifth with a 935 total.  ATU, Augustana and HSU along with Pool and two other individuals advance to the national tournament, which is set for May 17-20 in Findlay, Ohio.

“Anna did a great job today and I’m really proud of her moving on to the national tournament,” head coach Michael Bond said.  “She showed a lot of poise for a freshman.”

“We made up some ground and gave ourselves a chance as a team, but came up a little short.  We had a really good year and everybody is back, so I’m excited about our future.”

Pool’s 75 was one of four UCO scores in the 70s.  Makena Mucciaccio had a 76, while Marla Souvannasing and Sydney Roberts both shot 78 and J.T. Neuzil an 84.

Souvannasing ended up tied for 11th in the medalist standings with a 230 total, missing a playoff for the third and final individual qualifying spot by one stroke.

Pool was 2-over after the first four holes before using birdies on Nos. 7 and 9 to make the turn at even-par 35.  The rookie star stayed even with five straight pars on the back, but double bogeyed two of the final four holes for a back-nine 40.

Souvannasing bogeyed three of her first six holes, but birdied the par-5 seventh and finished the front nine with back-to-back pars for an outgoing 37.  The junior standout couldn’t get anything going on the back nine, making five bogeys and four pars for a 41.

Mucciaccio rebounded from a tough start to record her best round of the tournament.  She double bogeyed the first hole and was four-over through five holes before rallying to play the final 13 holes just one-over.

SWOSU dropped two spots on the leaderboard from fifth after posting a 316 on Wednesday, its highest total of any round.

For the second time this week, Elin Wahlin led the way for SWOSU, posting a 75 in the final round to match her best score of the tournament. Wahlin totaled 229 through 54 holes, tied for seventh place. She was tied with Chong Yong for the final individual spot, but lost in a playoff.

Gloria Choi tied for 17th place at 232. Chloe Thackeray shot 80 and 243. Jenna Eidem finished at 247 and Emily Folsom shot 82  was the final scorer for SWOSU, finishing the event with a 247 total (+34) after having her toughest day on the course on Wednesday. Emily Folsom finished her year with an 82.