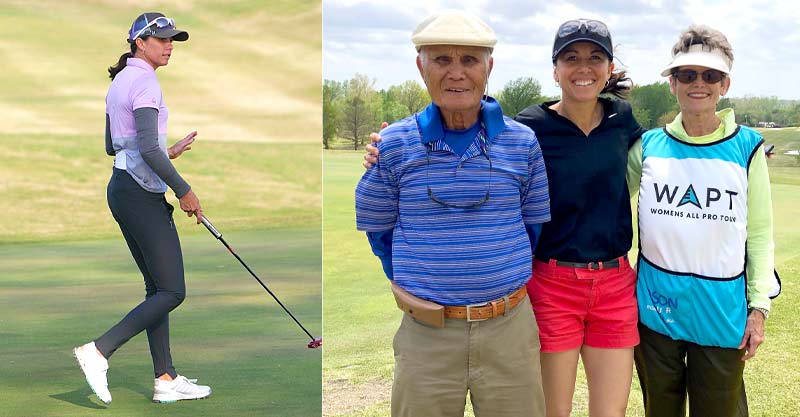 Walking off the wind-swept River Course at the Club at Indian Springs, Stacy Upton (Prammanasudh) smiled and hugged mother Brenda, who had just caddied in 30 mph winds for the second time in four days.

She shot a 1-over par 73 in the fourth and final round of the FCA Women’s Championship on the Women’s All Pro Tour, good to finish in a tie for 13th.  The event and $10,000 first-place check went to Amanda Tan of Singapore, the only player in the field to shoot under par in the final round. Her 71 put her at 1-under for the tournament.

Stacy P, as she was known to everyone during her junior, collegiate and LPGA Tour careers, the latter of which ended in 2013, entered the event as a favor to son Ryp, 10, who caddied during the Wednesday and Thursday rounds. Mom caddied Tuesday and Friday, while father Lou, her long-time caddy during her junior days and early in her LPGA Tour career, walked all 72 holes with her at age 83.

“It was fun, sort of,” Stacy said. “I’m glad to know that the game is still in there. But it can stay in there. This was a grind.”

Did playing in a competitive event against younger peers trigger any longing to return to competition?

“No,” she said with a laugh. “I’m going back to playing tennis. You can be done in an hour and a half, not six hours.”

The game is still in there. Shooting 73 in howling winds on a firm golf course is no easy feat and only four players did better Friday, including Tan, whose round included three birdies and two bogeys.

Former University of Oklahoma golfer Valerie Tanguay shot even-par 72 in the final round to move up nine spots into sixth place at 6 over. Former OU golfer Kaitlin Milligan shot a final-round 77 and finished tied for 19th.

Jordy LaBarbera, who shot 5-under in the first round and led for 54 holes, shot a final-round 78 to fall four shots back but still finished second at 3-over