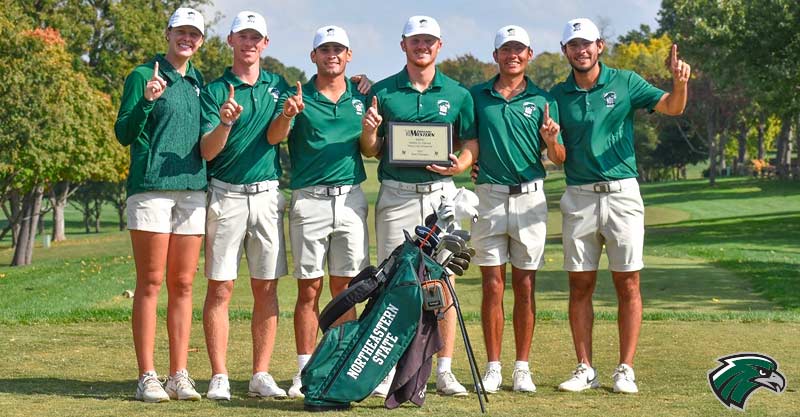 ST. JOSEPH, Mo. – Behind a 3-over round Tuesday and four individual finishes in the top seven, Northeastern State powered its way to the top of the leaderboard to win the Holiday Inn Express Classic by three strokes over Missouri Southern State.

Brett Wilcoxen finished 1-under (72-69-71=212) for the tournament with a career-best runner-up finish.  His 212 score is a career-low for a three-round tournament, beating his previous mark by three strokes.

Christian Yanovitch fired off the second-lowest round of the day with a 69 to match his career low and was tied for third place on the leaderboard scoring a 216 (74-73-69).  The finish for the sophomore is a career-best.

Carlos Gomez had a 218 (72-72-74) and was tied for seventh on the leaderboard.  The top ten is the second of the season for the fifth-year senior and 11th overall.

The RiverHawks beat out Missouri Southern State by three strokes, and it is the first time since Sept. 2013 that NSU had five golfers finish in the top 20 on the leaderboard in a regular season event.

Northeastern State will return to the course on Oct. 17-18, where they will play in the Newman Jet Classic in Newton, Kansas.