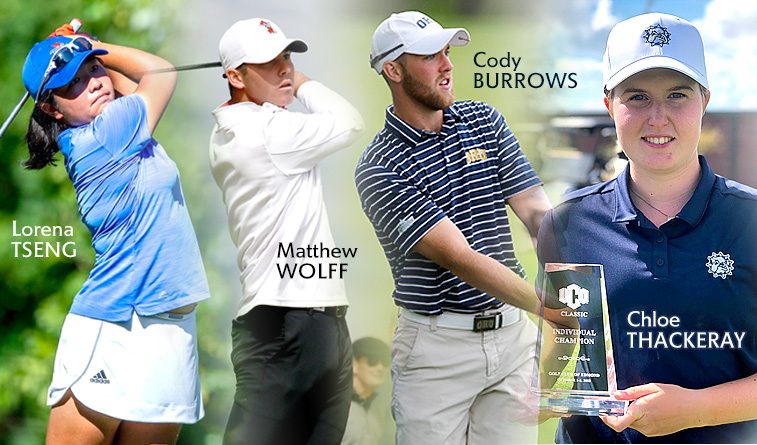 IRVING, Texas — Following victories in each of OSU’s first two events to start the fall season, Matthew Wolff has been named the Big 12 Golfer of the Month for September.

The sophomore opened the year with his first collegiate victory, posting a 17-under total of 199 at iconic Pebble Beach en route to a one-shot victory at The Carmel Cup. Wolff carded scores of 65, 66 and 68 in the victory.

At the Olympia Fields/Fighting Illini Invitational, Wolff led the Cowboys to an 18-shot victory, their first of the season. The Agoura Hills, Calif., native notched another one-shot victory in the process. Wolff carded rounds of 65, 69 and 70 for a 6-under 204 total at the historic venue.

Wolff is currently ranked No. 1 in the Golfweek/Sagarin Ranking.

He and the Cowboys will be back in action on Oct. 12 when they begin play at the Big 12 Match Play Championship in Houston.

Burrows turned in a 70.6 stroke average in two events, which included a runner-up finish at the Memphis Invitational. Burrows finished that 54-hole event with a career-best score of 208 (-8) to lead the Golden Eagles to a third-place finish. He opened the season with a 68 (-4) and was under part in all three rounds. In six rounds so far, the three-time All-Summit League performer has yet to shoot higher than a 73.

Toscano opened her junior campaign by capturing medalist honors at the UNO Invitational.  She won the 54-hole event by six strokes and helped the Jackrabbits run away with the team title by 28 strokes. Toscano finished at even-par 216 and closed with a 71 (-1). The Huelva, Spain native turned in another top-15 finish at the Minnesota Invitational against a field that included five teams that participated in 2018 NCAA Regionals. She closed the month with a 73.78 stroke average and six rounds of 73 or better.

RUSSELLVILLE, Ark. – After claiming the individual medalist honor at the UCO Classic, SWOSU senior Chloe Thackeray has been named the Great American Conference Golfer of the Week. The award was announced Wednesday afternoon by the league office.

Thackeray earns the first Golfer of the Week award in her career. She earned the award after winning the tournament and leading her team to a third-place finish at the event. Thackeray fired a three-under par 68 in the first round to finish the day in the top spot. She would record a 74 on day two to finish at even par and win the event by three strokes. Thackeray has been instrumental in helping the Bulldogs to four Top 10 finishes this season and is the second individual medalist, joining teammate Gloria Choi who won the NSU Classic.

The Lady Bulldogs will be back in action October 16-17 at the NCAA Division II Central Region Preview in Muskogee, Okla.

Tseng made a strong first impression in her debut events on the collegiate golf course with two top-4 performances.

She led Tulsa to a team victory in her first tournament at the Hobble Creek Fall Classic with a top-5 finish and followed it up with a second-place performance at the Lady Paladin Invitational.

Tseng and the Golden Hurricane women are in action next at the Ron Moore Intercollegiate in Denver, Colorado, this weekend, Oct. 5-7.