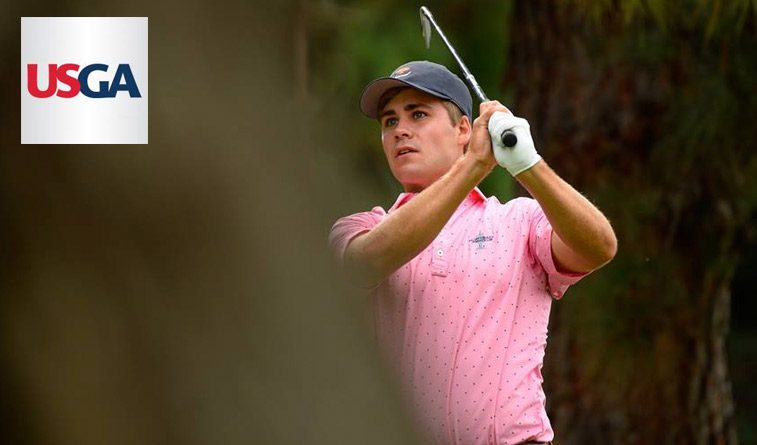 Photo: Hayden Wood plays his tee shot on the 12th hole during second round of stroke play of the 2017 U.S. Amateur at Bel-Air Country Club in Los Angeles, Calif. on Tuesday, Aug. 15, 2017. (Copyright USGA/JD Cuban)

Hayden Wood of Edmond and Oklahoma State followed up a 64 on Monday with a round of 67 on Tuesday at Bel-Air, setting a U.S. Amateur 36-hole scoring record with that 131 total and leading a parade of five Cowboys into match play beginning Wednesday.

Also qualifying were Matthew Wolff and Zach Bauchou, both tied for 19th at even par, Kristoffer Ventura, tied for 29th at 1 over. Brendon Jelley of Tulsa was in a playoff with 13 players for the final eight spots at 4 over and made it through Wednesday morning, despite the USGA listing him as having missed the cut on its website Tuesday night.  OSU’s Viktor Hovland finished 10 over.

Playing in his second U.S. Amateur, Wood posted a 3-under-par 67 that included four birdies and a bogey at Bel-Air Country Club, which followed his 6-under 64 at The Riviera Country Club in the first round on Monday.

“It feels good, with 312 guys it is awesome,” Wood said. “To play that way these last two days has been good. I like where my game is. I feel comfortable on this course (Riviera) and it fits my game. I am looking forward to it because the tournament starts tomorrow (Wednesday).”

“I just switched to a new putter and my speed has been a lot better. I haven’t three-putted so far, and to do that at these two courses is a testament to some good speed.”

One of the players who shared the first-round lead with Wood, University of Oregon sophomore Norman Xiong, of San Diego, Calif., shot an even-par 70 at Bel-Air for a 36-hole total of 134, good for the No. 2 match-play seed behind Wood.

“It was fun,” said Xiong, 18, who won the Western Amateur two weeks ago. “I played some really solid golf. I did what I needed to do and got through to match play, which is the biggest goal.”

Brad Dalke, of Norman, Okla., last year’s finalist to champion Curtis Luck, shot rounds of 75-77 to miss the match-play draw, along with 2016 U.S. Mid-Amateur champion Stewart Hagestad, of Newport Beach, Calif., who missed the playoff by two strokes after rounds of 72-74.

There will be six rounds of match play, beginning on Wednesday at 8:50 a.m. The Round of 32 and the Round of 16 are scheduled on Thursday, while the quarterfinals and semifinals are scheduled for Friday and Saturday, respectively. The championship concludes with a 36-hole final on Sunday, Aug. 20, starting at 7:45 a.m. PDT.

A 13-for-8 playoff for the final match-play berths is set for 7:30 a.m. at Riviera. The playoff starts on the drivable par-4 10th hole, followed by holes 14 through 18 with No. 18 repeated as needed until the final spots are filled.

Wood credited his approach for his stroke-play success.

“I’ve changed my course management,” Wood said. “A lot more conservative. I felt like I’ve been playing well all summer, but sometimes I would get in my own way. The tournaments I thought I was really going to play well when the course fit me I would maybe be a little too aggressive.”