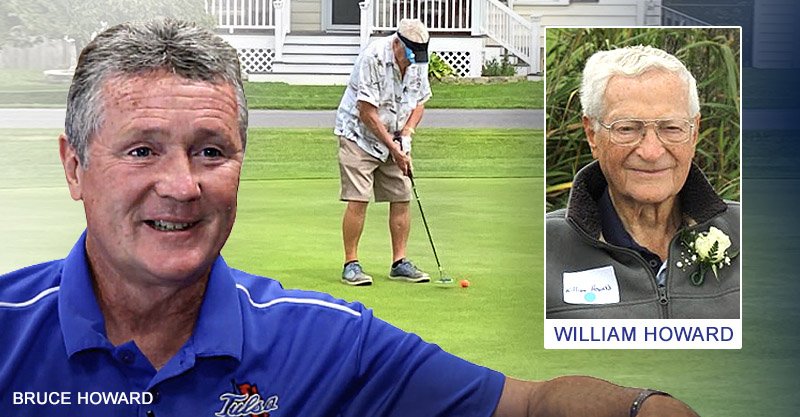 Imagine my surprise that a hacker who is happy to stay in double digits per round and who arrives for a 1 p.m. tee time at 12:58  was asked to write about golf.  That a ham-and-egg golfer like myself would even pretend to know enough about the game to pen something in a publication like this is somewhat astonishing to me.  But this is not your normal golf story.

Though I am not able to put in the time to become even reasonably decent at the sport, I do enjoy playing my some ten to fifteen rounds per year.  Golf being a lifelong endeavor, the possibility of playing for a long time is certainly attractive as we all grow older.

Which brings me to my father-William Howard, who took up the game of golf three years ago.  He was 91 years old.  At an age when most have long ago put the clubs away, he was drawn to the sport by his 72-year-old girlfriend, Leah, who has played for years.  Talk about robbing the cradle.  After hearing all about the game from her, eventually he started riding the cart and hitting balls using her clubs before finally getting his own mis-matched set.

My dad has always been a good athlete.  He played basketball and baseball in High School and played years of what they called “town team” ball after that in Northeastern Pennsylvania.  He was part of a close-knit family of dairy farmers in Bradford County, Susquehanna River basin.  He has three brothers and two sisters, ages ranging from 89 to 99.  All are still alive.  In fact, the oldest, Lucy, who will turn 100 in September, could probably beat me in a sixty-yard sprint.

In the early 1960s, our family moved to upstate New York to try dairy farming there.  Cows do not take a day off, so it was and is a seven day a week operation.  Bright, beautiful June days in the summer were not at a golf course, but usually bailing hay.  Milk the cows in the morning, bail the hay & stack it in the barn for eight hours and then milk the cows again in the evening.  Wash.  Rinse.  Repeat.  We did carve out enough time to play ball.  That is, until the sun went down, and we couldn’t see the fly balls anymore.  The only links we saw were those that we were repairing on various pieces of farm equipment.  No stories like that of Robert Landers, who became a Senior Golfing legend by hitting wedge shots over cattle.

After selling the farm in the 1970s, my Dad got into the insurance business for many years and was active in the community.  And oh yes, he still played ball.  There was a basketball church league where there were more fights than prayers.  For years he played slow pitch softball, which he played until he was 58.  We played on the same team for a few years in my late high school and early college time.  But just as I was starting to play golf, he never picked up a club.  Until age 91.

It is also important to point out the famous Howard temper, not good for the game of golf.  Just ask my clubs when I occasionally scuttle them along the ground in disgust after another bad shot.  Back on the farm, that temper was on display with my Dad and my two brothers.  In fact, if “That 70s Show” was portrayed in a Central New York dairy farm rather than a suburban Wisconsin town, Dad would have been Red Forman.  You know, “how about I put my foot in your ass”.  Except my dad actually did it.  You can ask my brother Ron, who, after dawdling to get out to the bus and getting the Red Forman treatment, spent a day at school with a manure boot print on the backside of his white pants.

But Dad’s patience has improved, and his temper has waned with age.  He probably plays 3 or 4 times a week now, on a small nine-hole course in Weedsport, New York (about 25 miles west of Syracuse).  It’s called Meadowbrook, not to be confused with the Meadowbrook in Tulsa.  A couple of years ago, he started regaling me with stories of his golf game, and the plan was for us to play last summer.  But Covid got in the way, and there was no trip for my family and me to upstate New York.  So, finally this summer the long-awaited trip happened.  I’m not going to lie and say, “this was something I always dreamed about, playing golf with my Dad”.  This is not the “Field of Dreams” version of golf, but it’s certainly gratifying to share something new with him.

For years, our conversations were about how the Red Sox, or Browns, or Syracuse University, or what the Tulsa Golden Hurricane teams were doing.  You know, Magic Johnson instead of Dustin Johnson, Xander Bogaerts not Xander Schauffele, Frank Haith instead of Jordan Spieth.  And of course the ubiquitous “did I ever tell you about the time I threw that guy out at home in the fog for the final out in the bottom on the ninth in 1949?”  Yes Dad, only about a thousand times.

So, the day arrives, and we’re playing nine holes at Meadowbrook.  The foursome is my father, his girlfriend Leah, my older sister Joanie, and yours truly.

The great thing about playing with a 94-year-old is, it’s a wonderful excuse.  The proper answer to anything is, “hey, what can I say, he’s 94!”.  “Why are you playing so slow?” someone might say.  “I have my 94-year-old Dad playin’ here!” will shut them up in a hurry.  The more likely reason we’re playing slow is that I’m still looking for the ball I sliced into the forest.  By the way, Dad tees off the ladies tees with Leah, and in this case, my sister.  I couldn’t care less.  In New York lingo, “Hey, he’s 94, whaddaya want from me!”

We get to the first tee and there are two groups in front of us.  Knowing the layout, Leah says “let’s go over there and start on seven.” As we do that my sister notices a twosome coming down the 6th fairway. I have no idea of the course layout, so it didn’t matter to me where we started.  As happens, we hack it around on the first hole, two balls off the tee, mulligan, whatever.  As we’re thrashing away on seven, the twosome finishes up six and decides to bypass seven and go to eight, giving us the severe stink eye.  So right on cue, the thought is “Hey, I got my 94-year-old Dad here-give me a break!”

Speaking of patience and temper, my sister, who has golfed for many years now, has her breaking point. When Dad investigates and stands over a 1-foot putt for five minutes, she says “Jesus, putt already!!”.  And when my father messed up, he still would spit out a “Judas Priest” on occasion, but far less than the expletives that others (including me) in our crew would spout after chili dipping.

Oddly, I can’t remember a lot about the round itself. I think I shot a 47 or 48 for nine holes, the others were higher. But I won’t forget the sight of my 94-year-old Dad teeing it high and letting it fly, albeit mostly line drives up the middle. He still struggles a bit with the short game, but it makes me wonder how good he would be at this point had he taken up the game at 51 or 61, rather than 91.

So we played, we finished and I was too much in the moment or too stupid, to even think of taking a picture. It was honestly not something I had the least bit of interest in sharing on Twitter. Sounds selfish, but it was our moment. It matters not what anyone else thinks of it.  It was a good day. Had I shared on social media I’m sure there would be tons of “Oh, what a great thing” comments, along with that guy who shrieks “Are you trying to kill him?  That’s elder abuse!”

Two days later my 30-year-old son Ben joined me and Dad for another round of nine. Again, even though there was a generational feel, I was not thinking of taking a picture. Until the final hole, where I got Dad putting.

How do I put into words what I owe him? He was the one who ingrained a love of sport in me, helped me appreciate the joy of playing a kid’s game, no matter what it was. I would not be a broadcaster of sports if I didn’t love the games. I would not love the games if not for my father. I am indebted to him for whatever course my career has taken.

Thanks Dad.  I’ll see you next year on the first tee at Meadowbrook, when you are 95.

Bruce Howard has served as the “Voice of Golden Hurricane” football and men’s basketball since 1993. He will be calling the game when Tulsa opens its football season at 6:30 p.m. Thursday against UC Davis.