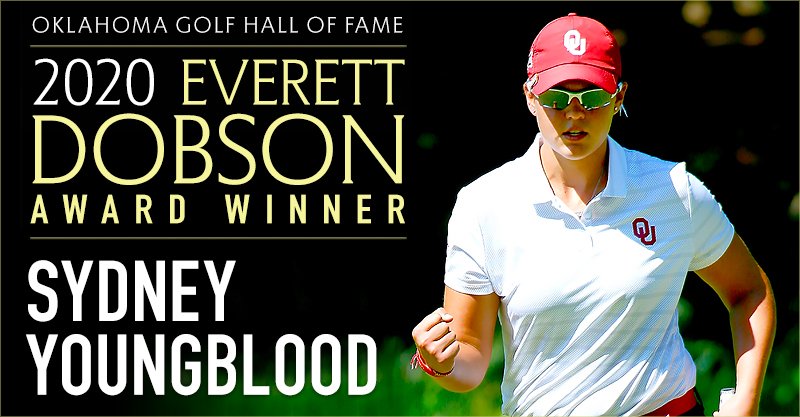 Sydney Youngblood, a four-time Girls’ State High School Champion at Durant who overcame serious shoulder injuries and surgery to star at the University of Oklahoma, is the 2020 recipient of the Everett Dobson Award. Nominations for the award are submitted to the Oklahoma Golf Hall of Fame annually and voted on by board of directors.

The Everett Dobson Award recognizes an outstanding male or female golfer graduating from an Oklahoma college or university, specifically one who exemplifies strong citizenship, sportsmanship and character. The recipient is awarded $5,000.

“I’m deeply honored to receive this award and thank the board,” Youngblood said. “This will certainly help as I pursue my Masters and start my professional career.”

Youngblood graduated from OU in the spring and is now taking graduate courses at Southeastern Oklahoma State University in Durant with an eye toward becoming a collegiate coach while also testing the waters of professional golf. She has been playing on the Women’s All Pro Tour and had planned to help coach the SEOSU team as a volunteer assistant but there is no fall schedule due to the pandemic.

Youngblood injured her shoulder as a freshman and it was a difficult 18-month recovery process. She came back to play well as a redshirt sophomore and junior and was poised for a strong senior spring before the season was cancelled. She also won the 2019 Women’s Oklahoma Golf Association State Amateur Championship after being a runner-up three times previously. She leaves OU with the fifth best scoring average (73.41) in OU history.

Kevin Johnson, a senior instructor with Hank Haney who works with Youngblood, said in a letter of recommendation that Sydney is uniquely deserving of the award.

“The Everett Dobson Award recognizes a graduate who exemplifies strong citizenship, sportsmanship and character. As successful as Sydney has been on the course, I would say those three things mean as much if not more to her than the trophies. I am way more proud of the young lady Sydney is than the golfer . . .”

The Everett Dobson Award is named for the Oklahoma City businessman, philanthropist and avid golfer and champion of the game who provided the initial impetus and funding to start the Oklahoma Golf Hall of Fame.  The mission of the Oklahoma Golf Hall of Fame is to recognize and honor those individuals who through their achievements, character, spirit or leadership have demonstrated sustained excellence in competition or contributed in other ways to the growth, promotion, legacy, history or traditions of golf in Oklahoma. The next induction class will be in 2021 in Oklahoma City.

Previous winners of the award are