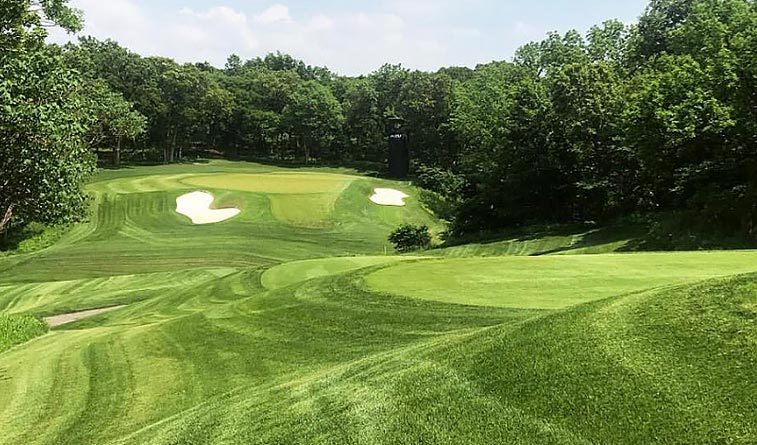 STILLWATER – Having played Karsten Creek for the last four years, Oklahoma State golfer Emma Broze knows what kind of a challenge the Tom Fazio designed track can be.

So, the Cowgirl senior has a word of advice for the visitors descending on Stillwater for the upcoming NCAA Championships, which are being held May 18-30 at Karsten Creek.

“If you can avoid the rough this week you’ll be lucky,” Broze said. “I think the greens are going to be really fast, so just be prepared for that.”

With the over-seeded rough, greens that make the ball roll as if it were on glass and intense Oklahoma winds sweeping down the fairways, Karsten Creek will be a challenge not only for Broze, but also for the rest of the field.

“If the winds pick up just stay on the fairway and the greens, two-putt, make your par and move on,” Broze said. “That’ll be good.”

Broze will become the eighth Cowgirl to play in the NCAA Championship as an individual and first since Kelsey Vines in 2012. Her first round will tee off at 1:10 p.m. on the first tee and live scoring can be followed at GolfStat.com.

The Oklahoma Sooners will tee off early beginning at 7:30 a.m. Complete pairings will be posted later today.

“We just need to focus on ourselves,” said OU head coach Veronique Drouin Luttrell. “At the end of the day, we’re just as good as anybody else out there, we just need to believe we can do anything. I think the course is going to be pretty demanding. The rough should be pretty long and we’ll need to keep it on the fairway as much as possible – that will be the key for sure.”

“It’s really exciting anytime you get to go to nationals, but will be so much more exciting when you get to go as a team,” said Soo. “It’s going to be a tough course – Karsten Course is always a challenge. I think the strategy is going to be really important. It might not be the team who makes the most birdies, but come down to the team that is steadiest with their pars. We pretty much have to play our games and we should be good.”

Oklahoma enters the pinnacle event of collegiate golf with one of its best-scoring teams in program history. Boasting a season round scoring average of 289.12, the Sooners are on pace to break the school’s season record (290.73 in 2016-17). Oklahoma ranks eighth in the nation in average individual round score (73.22) and has strung together the sixth-most birdies in the country (471).

The Sooners tee off in the opening round at 7:30 a.m. CT on Friday off the first tee and will be paired with golfers from Auburn and Florida State. Live scoring will be available on Golfstat.com.

Admission to the NCAA Championships is $10 per round, or $30 for an all-session pass, and can be purchased on site or at NCAA.com/tickets.

Julienne Soo, junior – Her season stroke average of 72.20 is the third-lowest in the Big 12 and on pace to break the OU program record (72.26 set by Chirapat Jao-Javanil in 2012-13)…Named to the All-Big 12 Team for the second straight season…Also named to the Big 12 All-Tournament Team and Academic All-Big 12 Team…Boasts six top-20 finishes over her last seven tournaments, including a fourth place showing at the NCAA Austin Regional.

Sydney Youngblood, r-freshman – In the lineup for the third time this spring (all postseason tournaments) after coming back from a shoulder injury…Coming off a 24thplace finish at the NCAA Austin Regional, shooting a 219 (+3)…Best finish of the year was a ninth-place showing at the Jim West Challenge with a career-low 209 (-4)… Was a three-time Oklahoma Class 5A State Champion at Durant High School.

Kaitlin Milligan, freshman – Her 110 birdies are the second most this season by a Division I freshman…Named Big 12 Golfer of the Month for February…Shot a 62 (-10) in the opening round of the Westbrook Invitational – the lowest round by a Division I golfer this season and the best round in both OU and Big 12 history…Took second place at the Westbrook Invitational after shooting a 54-hole total of 199 (-17), good for the lowest individual tournament score in school history.

Hannah Wood, senior – On pace to finish her collegiate career with the lowest career scoring average in OU history (73.01)…Boasts the second-most par-or-better rounds in program history with 57 – two shy of tying the program record (59 by Chirapat Jao-Javanil, 2011-14)…Named to the All-Big 12 Team for the second time and was also named to the Big 12 All-Tournament Team and Academic All-Big 12 Team…Boasts five top-20 finishes over her last seven tournaments.

Valerie Tanguay, senior – Has claimed three top-10 finishes in her last five tournaments…Named to the Big 12 All-Tournament Team after finishing in eighth place at the conference’s championship…Tied for second place at the Hurricane Invitational while competing in the event as an individual, shooting a career-best-tying 67 (-5) on the final day to finish with a 211 (-5).