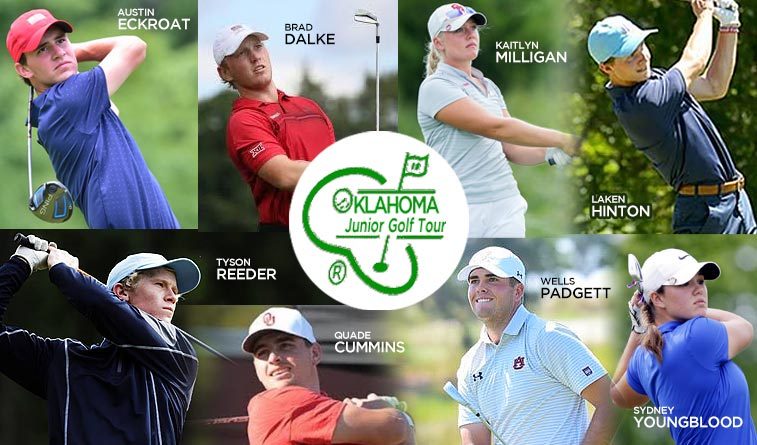 The Oklahoma Junior Golf Tour will be well represented in the NCAA Women’s and Men’s Championships the next two weeks at Karsten Creek Golf Club in Stillwater.

Two fifths of the Arkansas starting lineup are OJGT vets in Mason Overstreet of Kingfisher and Tyson Reeder of Edmond.

Edmond North grad Laken Hinton shot a 68 in the final round to help propel Augusta State back to the NCAA Championship for the first time since 2011, when they won the title at Karsten Creek and were led by one Patrick Reed.

Wells Padgett of Wichita, who played frequently on the OJGT, helped the Auburn Tigers move on through the Norman Regional with his tie for 38th.

McCain Schellhardt and Sam Humphreys, both of Edmond, could not get the UMKC Roos through the Norman Regional, although Schellhardt finished tied for 29th.

In the women’s championship which begins Friday, the hopes of the Oklahoma Sooners rest heavily on the performances of OJGT stalwarts Sydney Youngblood of Durant and Kaitlyn Milligan of Norman. The two are both extremely talented and competitive and if on their games could take OU a long way in this championship.

All of which has OJGT director Morri Rose beaming with pride.

“I’m proud of my babies,” Rose said. “It’s a really neat deal and a blessing to watch them grow and turn into these championship golfers.”