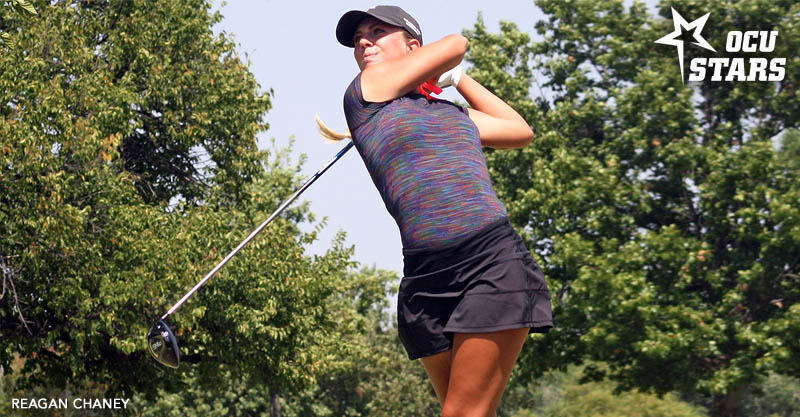 OKLAHOMA CITY – Reagan Chaney turned in the best round score in Oklahoma City University history in the first round of the Southwestern Christian Fall Invitational on Tuesday at Lake Hefner Golf Course.

Chaney’s round leapfrogged Laura Jones’ 66 in the second round of the Oklahoma Intercollegiate for Women on Oct. 16, 2007 at The Territory Golf & Country Club in Duncan, Okla. Jones produced a 4-under-par score on the par-70, 5,853-yard course.

Chaney buried eight birdies, including birdies on six of the last seven holes. Chaney made par without a bogey on the other 10 holes. Chaney posted the top round against par for a Star. Seven OCU golfers have shot a 5-under-par score with Lauren Behnken and Natalie Gough each shooting 67 in the Southwestern Christian Invitational at Lake Hefner on Sept. 23-24, 2019. Ashlyn Acosta fired a 69 to lead Redlands while Alijca Milewska contributed a 72.

Four OCU players made the top five, and five Stars took spots in the top 10. Paige Wood shot a 34-35–69 to tie for second place individually. Wood, a freshman from McKinney, Texas, knocked in five birdies. Gough held a share of fourth place with a 34-37–71. Gough, a senior from Bixby, Okla., sank four birdies.

OCU’s Morgan Palermo carded a 35-39–74 entered as an individual. Palermo, a freshman from Parker, Colo., collected four birdies and an eagle on the par-5, 448-yard second hole.

The tournament concludes with the final round 9:30 a.m. Tuesday at Lake Hefner. Oklahoma City will tee off at noon Tuesday at the first hole on Lake Hefner’s South Course.