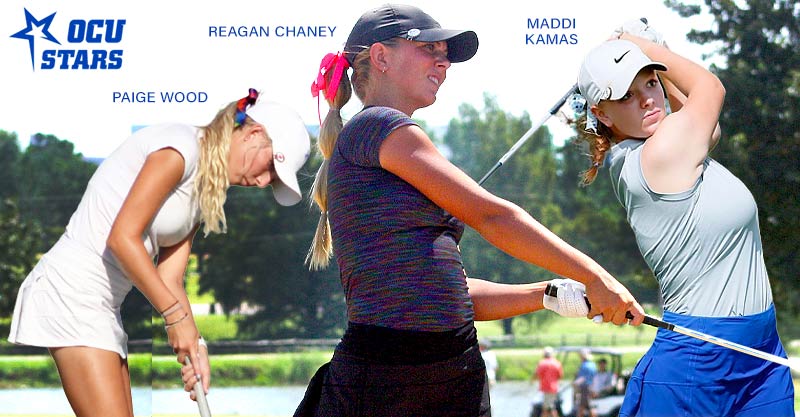 OKLAHOMA CITY – Oklahoma City University showed why it has the No. 1-ranked team, standing atop the leaderboards for individual and team play for the Southwestern Christian Invitational at Lake Hefner Golf Course.

The Stars, top-ranked in the NAIA Women’s Golf Coaches Association ratings, totaled a score of 11-under-par 277 with the OCU Blue team five shots back with a total score of 282. The closest school is Bethany (Kan.) at 9 over par.

Oklahoma City sophomores Reagan Chaney and Paige Wood sit atop the individual standings at five 5 under par with Maddie Kamas trailing by a stroke. Their closest opponent is Cristina Galban of Southwestern Christian at 3 under.

Kamas, a sophomore from Kingfisher, Okla., turned in a 35-33–68 while knocking in five birdies.

Morgan Palermo is tied for fifth with freshmen Aubrey House at 2 under par. Palermo, a sophomore from Parker, Colo., tallied a 32-38–70 with four birdies, while House, a freshman from McAlester, Okla., supplied OCU with a 35-35–70 while sinking four birdies.

Natalie Gough and MaKayla Tyrrell each stood even par on the day. Gough, a senior from Bixby, Okla., and Tyrrell, a freshman from Southlake, Texas, each carded a 37-35–72.

The Stars look to continue their strong first round as they start round 2 at 7:30 a.m. Wednesday.