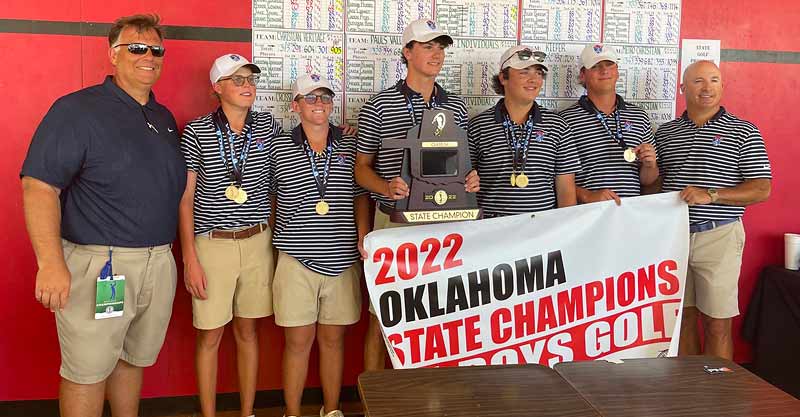 Ryder Cowan started the day with a two-shot lead on Oklahoma Christian teammate Bryant Polhill.. Not always sure what Polhill was up to behind him, Cowan knew he had to concentrate on the task at hand in Tuesday’s final round of the Class 3A State Championship at Lakeview Golf Course in Ardmore.

Polhill got off to a blazing start with birdies on the first two holes to pull within a shot. But Cowan, the University of Oklahoma commit as a junior, stayed steady himself, finishing with a final-round 68 to finish five clear of his talented teammate.

Cowan (70-65-68) finished at 10-under 203, while Polhill was second at 5-under 69-68-71. Their combined heroics wasn’t enough to dislodge Christian Heritage Academy as the team champion, however, as the Crusaders shot a final-round 301 for a 12-shot victory.

Christian Johnson led four players in the 70s for Heritage with a final-round 72. Also Gavin Watson shot 76, Carter Nutt 76 and Nolan Rankin 77. Johnson and Watson tied for third place at 220 with Collin Bond of Community Christian.

“We got to around hole number 6 and we are just kind of all over the course at that time,” Wolford said. “And I looked at Gavin Watson, our only senior, and I told him we are going to make 13 fours coming in, I don’t care how, we are just going to do it. And that seemed like a stretch at the time, but it got him refocused and while he had a birdie and a bogey in those last 13 holes, he netted 13 pars coming in.”

In the individual race between Cowan and Polhill, a double bogey by Polhill on the sixth hole gave Cowan breathing room. He made a birdie on the 13th hole to pull back within two shots but that was as close as it got.

Cowan was steady down the stretch. On the par-5 14th hole, he bombed a drive, then hit a high draw with a 6-iron to 5 feet and made the putt for an eagle.

On the drivable 15th hole that has water left of the green, Cowan showed patience by laying up off the tee, playing his second shot right of the flag and making an easy par. On 17 he hit an amazing second shot over a 50-foot tall tree to 5-feet. He converted that birdie as well to seal the victory. (You can watch the video of this shot on the 73rd hole Twitter account)

“I knew that I had to do something special because I knew Bryant was behind me and he was coming, he played good all three rounds,” Cowan said.

“I’ve played against Bryant since we were nine years old and we’ve always had this competitive rivalry, but he’s always great to be around, a great teammate, and a great guy, it can’t get better.”