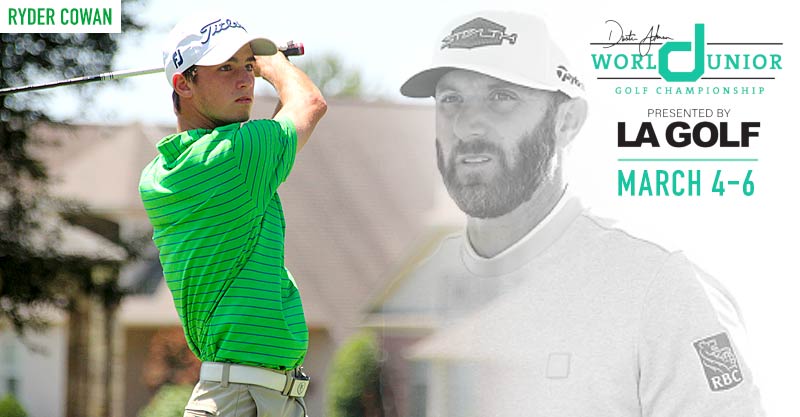 MURRELLS INLET, S.C. – Ryder Cowan of Edmond will be in the elite field for the seventh annual Dustin Johnson World Junior Golf Championship presented by LA Golf, which will be played March 4-6 at TPC Myrtle Beach and will again feature one of the strongest fields in youth golf.

A 54-hole, college-style event, 90 players (60 boys, 30 girls) secured invitations to the DJ World Junior, including some of America’s premier young talent. On the boys side, 44 of the 60 players are ranked among America’s top 100 by either Golfweek or Junior Golf Scoreboard, while 26 of the 30 girls are top 100 players.

The boys field will be headlined by Ben James (Milford, Ct.), America’s No. 1, according to Junior Golf Scoreboard, No. 4 Luke Clanton (Hialeah, Fla.), and No. 7 Johnathan Griz (Hilton Head, S.C.). All three players are seniors and have signed to play collegiate golf – James at the University of Virginia, Clanton at Florida State University, and Griz at the University of Alabama.

Cowan won the AJGA’s Gateway First Bank Tulsa Junior by five shots at Cedar Ridge in August. He is entering his junior season at Oklahoma Christian School and has committed to play at the University of Oklahoma. He is currently ranked second among Oklahomans behind Will Sides of Tulsa and No. 75 nationally by Junior Golf Scoreboard.

With Johnson’s support, the tournament provides players a PGA Tour-like experience, and the opportunity to test themselves against a premier field.

A significant part of the event’s appeal is TPC Myrtle Beach, one of the Grand Strand’s most decorated layouts. TPC Myrtle Beach has hosted the Senior PGA Tour Championship and been ranked among “America’s 100 Greatest Public Courses” by Golf Digest, making it an ideal venue to test golf’s rising young stars.

Johnson’s involvement with the tournament reflects his long-time commitment to junior golf, particularly in South Carolina, where he grew into one of the world’s best players. Through the Dustin Johnson Foundation, which is headquartered in Myrtle Beach, Johnson has donated more than $500,000 to junior golf, sponsoring numerous events throughout the state and helping cover entry costs for kids who need financial assistance.

For more information and to see the complete field, visit www.worldjuniorgolfchampionship.com.