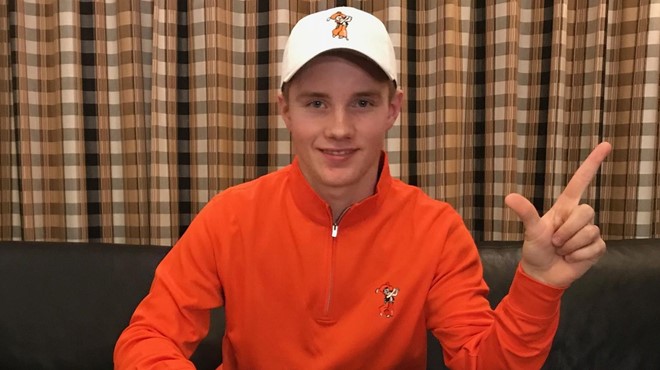 “Rasmus continues a long history of top European players joining the Cowboy family. He’s a very good ball striker and has a lot of international experience that will help his transition to college golf,” Bratton said. “He and his dad  got to enjoy their first Bedlam game over the weekend. This weekend helped Rasmus understand what Oklahoma State is all about. We can’t wait for his arrival in the fall.”

A native of Nivaa, Denmark, Neergaard-Petersen has built an impressive resumé, competing in events across Europe.

In 2017, he captured the Danish Under 18 title and scored the clinching team point for the Danish squad at the European Boys Team Championship. Additionally, he was runner-up at the Duke of York in England, sixth at the German Boys and 13th at the Danish International Amateur Championships.

The 2016 campaign saw Neergaard-Petersen close with a 68 at the Italian International Amateur Championship to finish 20th before earning a ninth-place finish at the Irish Amateur courtesy of a closing 68. He finished third at the Danish Boys, was 19th at the German Boys, runner-up at the European Boys’ Team Championship in Austria before posting a 10th-place showing at the Carris Trophy in England.

Neergaard-Peterson finished fifth at the Belgian International Boys Championship in 2015 before adding a 14th-place showing at the European Men’s Club Trophy.