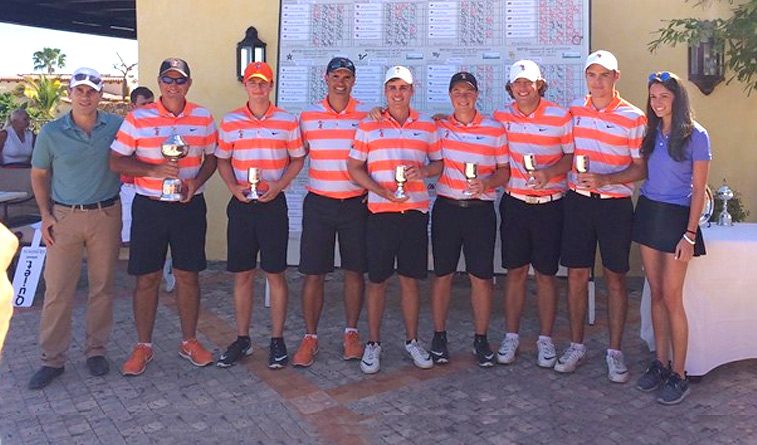 QUERENCIA, Mexico – Oklahoma State’s men’s golf team tallied its third victory of the season in impressive fashion on Tuesday at the Querencia Cabo Collegiate, rolling to a 10-shot victory at Querencia Golf Club.

The Cowboys entered the final round with a three-shot cushion over the field at the par-71, 6,928-yard layout before carding their 13-under score to pull away from the field. OSU finished with a 29-under total of 823. Baylor was the event’s runner-up at 833 and Texas finished third at 845.

The victory was the first in two starts this spring for the Cowboys, who entered play carrying a No. 8 ranking. OSU posted its first two victories during the fall at The Carmel Cup and the Paintbrush Invitational.

Washington’s Corey Pereira posted his second consecutive 67 to claim medalist honors at 9-under 204. He finished one shot clear of a quartet of players that included a pair of Cowboys.

Junior Kristoffer Ventura carded a closing 69 to finish at 205, while sophomore Zach Bauchou matched his career-best round with a 66, giving him his 5-under total and moving him up 10 spots into the runner-up position.

Ventura turned in a bogey-free outward nine that featured birdies at Nos. 4, 5 and 9 for a 3-under 33. His back nine included eight pars and his lone bogey of the day at the 12th.

Bauchou started his day on the third hole and quickly moved to 2-under with birdies at the fourth and sixth. He made his charge up the leaderboard on the back nine, carding five birdies over the first six holes before posting a 4-under 31. After carding a bogey at the first, he moved back to 5-under for the day and into the four-way tie for second.

Sophomore Hayden Wood joined Ventura and Bauchou in the top 10, using a 68 during his final round to finish at 206 and alone in sixth place.

Senior Zachary Olsen signed for a 70 during his final round to finish at 209 and tied for 13th place.

Freshman Viktor Hovland posted his low round of the event on Tuesday, turning in a 68 to move up eight spots into a tie for 21st place at 212.

OSU will resume its spring slate on March 6 when it begins play at the Southern Highlands Collegiate Masters in Las Vegas.