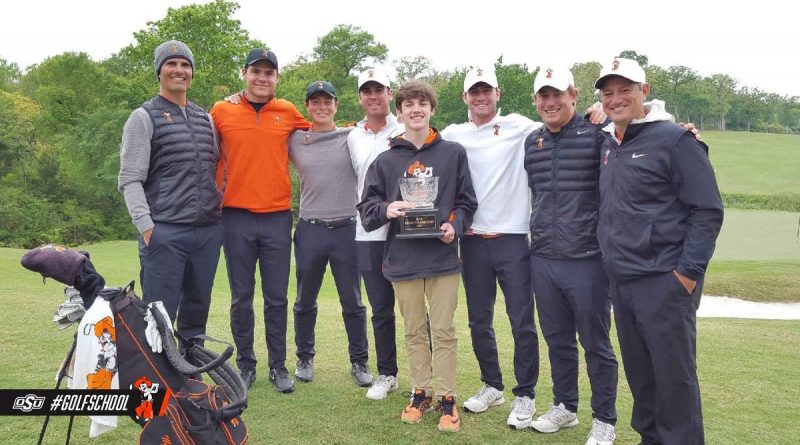 BRYAN, Texas – Oklahoma State’s men’s golf team staged a rally during the final round at the Aggie Invitational on Sunday to collect its seventh consecutive victory at Texas A&M’s Traditions Club.

However, the top-ranked Cowboys used an 11-under 277 to move to the top of the leaderboard with a 54-hole total of 5-over 869, placing them seven shots clear of the field to win the event for the fourth time.

The closing score by OSU was the round of the day by seven shots.

Texas A&M’s Chandler Phillips and Walker Lee shared medalist honors at 5-under 211 after closing with rounds of 67 and 73, respectively.

The string of seven consecutive victories for the Cowboys matches the school’s single-season record set in 1986-87. Head coach Alan Bratton’s squad will now take aim at the program’s overall streak of nine consecutive victories, which came as a continuation of the aforementioned string when the 1987-88 squad won the first two events of its fall slate.

Additionally, OSU has won eight of its nine events on the year, which is one shy of the second-best total for a single season in school history set on six occasions. The school record of 10 victories came courtesy of the 1985-86 squad.

Viktor Hovland led the Cowboys’ march up the leaderboard, firing a bogey-free 65 to vault into a tie for third place and finish just a shot off the lead at 212. The finish was the sixth consecutive top-five showing for the sophomore, who has one victory, two runner-ups, one third-place finish and a fourth-place showing during that stretch as well.

Hovland opened his round with four consecutive pars before carding an eagle at the par-5 fifth. He added a birdie at the eighth to turn in 3-under 33. After carding a par at the 10th, he reeled off three consecutive birdies at Nos. 11, 12 and 13 before carding his fourth birdie of the side at the 17th for a 4-under 32 inward nine.

Junior Zach Bauchou signed for a 72 during his third round after opening with a pair of 74s to finish at 4-over 220 and tied for 12th place.

Senior Kristoffer Ventura fired a closing 69 that included five birdies to climb 21 spots into a tie for 15th place at 222.

Freshman Austin Eckroat rounded out the OSU starting five with a 77 to post a 225 total, tying him for 28th place.

The Cowboys will look to make it eight victories in a row when they begin play at the ASU/Thunderbird Invitational on April 14 in Tempe, Ariz.