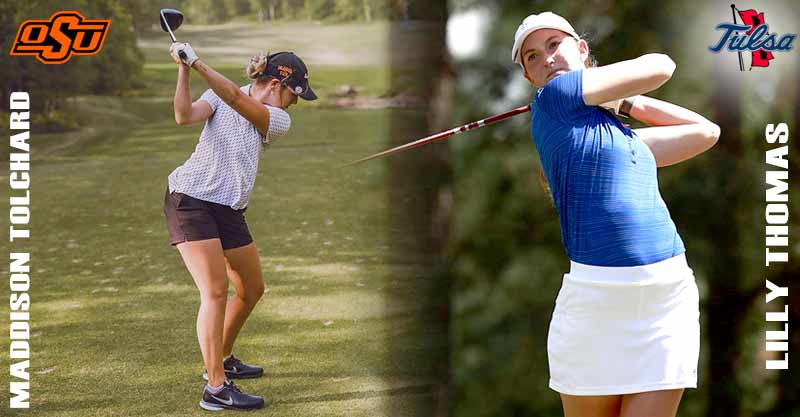 STILLWATER, Okla. – After day two of the Stillwater Regional at Karsten Creek Golf Club, No. 1-seeded Oklahoma State women’s golf sits just above the four-team cutline after a 10-over second round going into Wednesday’s final round.

The Cowgirls closed out the first two rounds at 18-over, one shot back of Clemson in third and one shot ahead of Michigan State, who sits in fifth place. Baylor will head to the final round leading the field at 1-over par after an impressive 3-under on Tuesday.

Arizona State closed Tuesday in second at 14-over.

Tulsa’s Lily Thomas fired a second-round 72 to move up to a tie for 13th overall at 148 and she leads the individual qualifiers.Sarah Bell of Oral Roberts is tied for 43rd at 159 after a second round 76 and Kiana Oshiro is tied for 49th at 161 after an 83.

Maddison Hinson-Tolchard once again turned in the best score among the OSU golfers in the field with a 1-under round, putting her in a tie for second overall when paired with her even par round on Monday. Hinson-Tolchard made an impressive run with three-straight birdies on holes three, four and five and later had a clean back nine, paring every hole to finish her impressive round.

Rina Tatematsu matched her first round with another 2-over 74 on Tuesday. Birdies on the sixth, 12th and 18th powered her to a tie for 11th on the individual scoreboard at 4-over heading into tomorrow’s final round.

Han-Hsuan Yu and Hailey Jones each carded respectable scores on a high-scoring day at the famously tough course. Yu finished the day 4-over with birdies on the first and ninth hole and now is 6-over for the tournament. Jones rebounded from a difficult opening round to finish 5-over on day two. She used a strong 1-over on the front nine with two birdies to help the Cowgirls remain in position to advance.

Lianna Bailey rounded out the Oklahoma State lineup with a 9-over second round. Despite a disappointing score, Bailey is still tied for most birdies in the tournament, with eight, and is second in par five scoring at 5-under. She’ll look to continue those trends Wednesday.

The Cowgirls will look to finish up the Stillwater Regional on Wednesday with a strong final round to stay in the top four and advance to the NCAA Championship Tournament next week in Arizona. OSU will tee off at 8:00 a.m. on hole No. 1 tomorrow alongside Michigan State and Auburn.

Clemson, Arizona State and Baylor – the three teams ahead of OSU – will start their rounds at 9:06 a.m. on hole No. 1.

Spectators are welcome at the three-day event and there will be no admission charge. Parking is available along the road leading into the golf course.