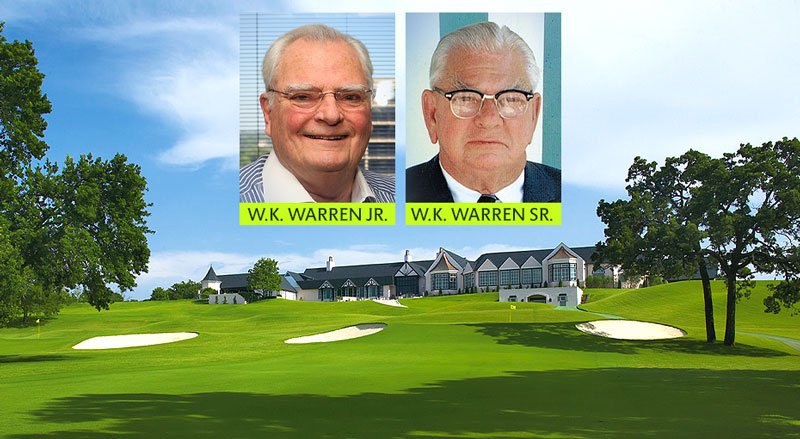 Note, the following story is from the 2016 induction into the Oklahoma Golf Hall of Fame of Southern Hills co-founder W.K. Warren Sr. and his son W.K. Warren Jr. With next week’s PGA Championship at Southern Hills Country Club, it seemed a good time to look back at their legacy.

One doesn’t have to be an accomplished golfer, instructor, coach, architect or even have spent a life in the industry to have made monumental contributions to the sport.

Recognizing that, the Oklahoma Golf Hall of Fame is introducing a new Contributors to the Game category, and it’s hard to imagine a more fitting first foray than to welcome Tulsa businessmen, philanthropists and golf enthusiasts W.K. Warren Sr. and W.K. Warren Jr.

Warren Sr., (1897-1990), founder of Warren Petroleum Company and later the foundation which gave rise to St. Francis Hospital and all of the associated Warren medical complex, played a pivotal role in the founding of Southern Hills Country Club, now one of the world’s most storied courses having hosted seven major championships and numerous other USGA and professional events. Warren Jr. is every bit as tenacious as his father when it comes to willing events to fruition. His determination was never greater than when he made sure a tight vote to build an additional nine holes at Southern Hills would pass in the late 1980s, or when he wielded his considerable clout to help persuade the PGA of America and United States Golf Associations to host their respective championships at Southern Hills in 1994 and 2001, respectively.

Former long-time Southern Hills member Vic Holmes has known both Warrens for many years and finds they share much more than a name.

“Mr. Warren Sr., in spite of being a hard-nosed businessman, always had a twinkle in his eye when the discussion turned to golf. He had a love for the game and for Tulsa. Bill Jr. has the same twinkle as his dad. What he has done behind the scenes to help this city land events like the PGA Championship and U.S. Open is just remarkable. And his thought process was to help not just Southern Hills, but the city. The tax revenues from these events are enormous.”

Warren Sr. was a successful oil and gas man in his own right but not yet on a par with Waite Phillips of Phillips Petroleum, when in 1934 he took Cecil Canary and went to the Chicago offices of Phillips to ask for 300 acres of prime south Tulsa real estate to build a new golf club.

Phillips, peering over a stack of requests on his desk, told Warren the following, according to the History of Southern Hills.

“Every paper you see contains a request for money to help start a business venture or support a worthy cause. Not all of the business ventures are worthy of much consideration, Mr. Warren, but yours is ridiculous!” Instead of giving money, Phillips gave Warren a challenge. Find 150 believers to put up $1,000 each, no easy task in the heart of the Great Depression, and Phillips would donate the land.

Warren found 140, and that was enough to impress Phillips. It was an early demonstration of the legendary Warren determination that has marked the Warren family leadership to this day, including grandson John Kelly Warren, now chairman of the Saint Francis Health System Board of Directors.

“One thing you have to love about my dad is he’s passionate about everything,” John Kelly said. “The smallest or the largest thing can become his personal mission. Both my father and grandfather have a great love for the game. For my grandfather, it was about business and he did a lot of his deals on the course. For my father, it’s just been for the love of the game and the community. He knew the more we could promote professional events, the more Tulsa would prosper.

“If there’s a Warren legacy, it’s to champion Tulsa and provide world class events that will garner world class attention.”

Bill Lissau worked for all three Warrens as president of the William K. Warren Foundation before retiring in 2011. He notes they all share what he calls “the Warren Way.”

“They all share a very competitive nature and they are visionaries,” he said. “There’s a big difference between being a visionary and a daydreamer.

“Bill saw the need for the West Nine at Southern Hills. He took that and sold the idea. There was some controversy about the idea, but he talked to everyone about its importance. It passed by six votes and that was all due to his hard work. Here it is 20 years later and you can’t find anyone who didn’t vote for it.

“The same thing happened at Notre Dame. They needed a championship golf course and the foundation made a contribution. He was very active throughout the construction and oversight of that golf course.”

For both projects, Warren Jr. had the foresight to select Ben Crenshaw and Bill Coore as his architects, now regarded as perhaps the nation’s best design duo. What led to that decision wasn’t just Crenshaw’s obvious knowledge and love of the game’s history, but that when Warren Jr. had asked him for an autograph to help a depressed young man in Tulsa, Crenshaw had instead written a three-page letter.

“I’m very excited about Mr. Warren getting in the Oklahoma Golf Hall of Fame,” Crenshaw said. “He really spearheaded that nine at Southern Hills and that was early in our design careers. When you start thinking about all he has done in that community and all the people he has helped, with the hospital and medical buildings and his private endeavors, it’s remarkable how much he has given back.”

Warren Jr. learned a tremendous amount about the art of persuasion and determination from his legendary father. Not just from business apprenticeship, but from rounds of golf. One of his favorite stories is of the time he began celebrating prematurely when their opponents in a four-ball match seemed doomed with a ball resting on a lily pad in a pond near the 17th green. Dad glared down the son while the opponent waded into the pond and knocked the ball on the green.

“He was the boss and let me know in no uncertain terms to keep my mind focused,” Warren Jr. said. “But I couldn’t have had a better teacher. He taught me so much about golf, religion, character, business and thinking outside the box.”

Although the Tulsa area has many fine golf courses, it’s difficult to imagine just what having a Southern Hills has meant to the city, region and state.

“Dad was very proud of Tulsa,” Warren Jr. said. “It truly was the oil capital of the world back then and Southern Hills was a very important part of its growth. The U.S. Open brought people from France, Italy, Ireland, Scotland and helped put Tulsa on the map as a lovely city to live in. It’s a golf destination. I have people from New York or New Jersey call me and want to become a non-resident member. Playing here is on many people’s bucket list.”

“The first thing that comes to many people’s minds that Tulsa is known for besides oil is Southern Hills,” he said. “Of course they all want to know more about it and they all want to come play it. I never miss an opportunity to invite them because of its storied history and what it’s meant.”

In addition to his careers with both Warren American Oil Company and the foundations serving all the medical facilities, Warren Jr. is a race horse owner and enthusiast and, like his father and now his son, is a long-time member of Augusta National. That has given him access to USGA insiders, which he hasn’t hesitated to use.

“Kings talk to kings,” Lissau said. “Bill has an ability to talk to people at their level. He’s a great executive and a great salesman. He’s always had an ability to do things and get people to believe in what he’s passionate about as well as anybody I’ve ever seen.”