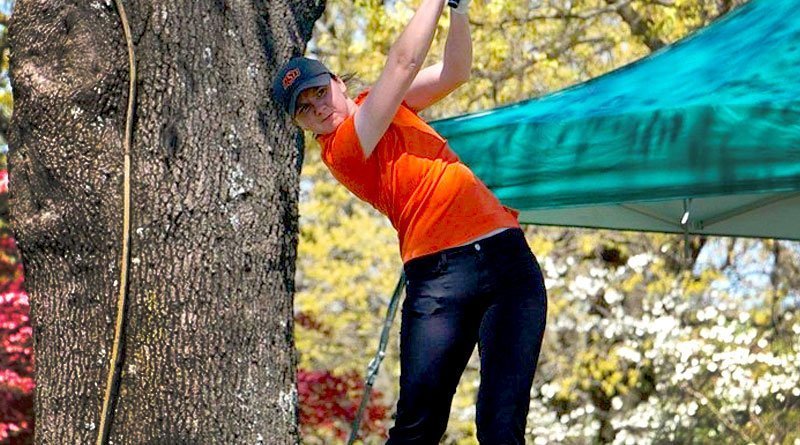 BROKEN ARROW, Oklahoma – Lianna Bailey used a late rally and birdied three of her last four holes. Han-Hsuan Yu was steady all day. But at the end of 18 holes, the two Cowgirl freshmen were tied for fourth place and Oklahoma State was fifth in the team race at the 2019 Big 12 Women’s Golf Championship.

No. 18 Oklahoma also got off to a slow start on a cool, wet morning and finished the day in sixth, a shot behind the Cowgirls at 301. Texas leads at 287.

“At times I felt as if it was a bit of a grind out there today,” Bailey said. “During the first few holes my swing wasn’t where I wanted it to be, but as the round gradually went on it all started to come together. I was able to turn a bad day into a solid day.”

Bailey opened her day at the Golf Club of Oklahoma with a double-bogey and was 3-over after 14 holes, but that’s when the Leicester, England native flipped the script. She birdied 15, 16 and 18 to finish the day at even par 72 and in a tie for fourth.

Moments later, Yu put the finish touches on her round that included a pair of birdies and 14 pars. The freshman also carded an even par 72 in her first Big 12 Championship round.

Texas is atop the leaderboard at 1-under 287, while Longhorn freshman Sara Kouskova leads all players at 5-under 67.

Cowgirl Michelle Forsland had an even par back nine to finish her day tied for 28th at 5-over 77. Emma Whitaker birdied three straight holes to wrap up her front nine, but ended her day at 8-over 80. Sara Camarena fired an 8-over 80 and is in 38th place.

The Cowgirls will begin Monday’s second round at 9 a.m. at the Golf Club of Oklahoma.

“We got off to a slow start this morning on the front nine and played better on the back,” said OU head coach Veronique Drouin-Luttrell. “We have a lot of golf left. In team golf anything is possible – we just need to play our own game and stick to our plans. We are excited for the next opportunity to climb the leaderboard tomorrow.”

Competing in her first round of postseason golf, freshman Libby Winans led the Sooners with an even-par 72. Winans is tied for fourth place and is five strokes behind first-place Sara Kouskova of Texas.

Joining Winans in the top 20 of the 45-golfer field is sophomore Kaitlin Milligan. The Norman native is tied for 14th place and is one stroke out of a spot in the top 10 after a 75.

Facing damp course conditions, Milligan and Winans got off to a slow start in Sunday’s round and were both 2-over team through the first four holes. Winans closed the round with two birdies and no bogeys over the final 14 holes while Milligan strung together 13 consecutive pars.

As a team, the Sooners shot three strokes better on the back nine than on the front.

Freshman Mikhaela Fortuna, making her Big 12 Championship debut, fired a 76 and is tied for 23rd. Sophomore Hannah Lee carded a 78  and senior Julienne Soo recorded an 83.

Oklahoma tees off in the second round on Monday beginning at 9 a.m. CT. The Sooners will be paired with golfers from Oklahoma State and TCU.

Live scoring is available on Golfstat.com and admission is free.