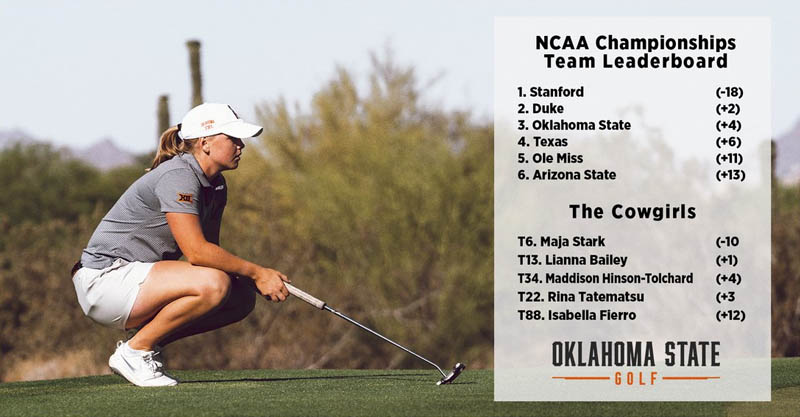 SCOTTSDALE, Ariz. – The Oklahoma State women’s golf team carded the lowest round ever by a Cowgirl squad at the NCAA Championships to jump into third place and easily push through the first cut at Grayhawk Golf Club.

The NCAA field was trimmed from 24 teams to 15 on Sunday, but the Cowgirls rested easy after a 6-under 282 helped them jump three spots on the leaderboard and into the top three.

Monday’s round will determine the individual national champion and the eight squads that move on to match play. Oklahoma State hopes to advance to the match play portion of the NCAA Championships for the first time since the format was introduced in 2014.

Maja Stark continued her hot streak in Scottsdale, Arizona. A day after posting a 3-under 69, the sophomore moved into the top five with a 4-under 68 – tied for the lowest round ever by an OSU player at NCAAs. The Abbekas, Sweden native carded seven birdies and had the third-lowest round of the day. Stark will enter the final round of stroke play nine strokes behind the individual leader, Stanford freshman Rachel Heck.

Lianna Bailey was 2-over on the day, but will enter Monday’s round tied for 13th place. Isabella Fierro was also 2-over on Sunday.

The Cowgirls have 48 birdies through 54 holes, which is just four behind Duke for the tournament lead. OSU will tee off Monday’s round at 1:28 a.m. Golf Channel’s coverage of the NCAA Tournament can be seen from 4-8 p.m. CT and live scoring is available at GolfStat.com.