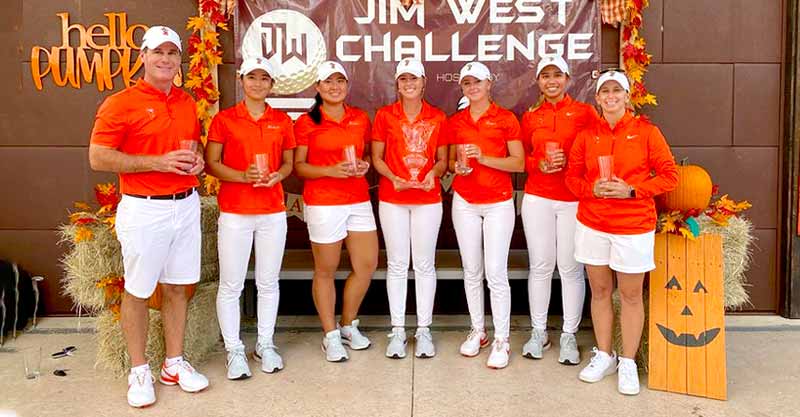 SAN MARCOS, Texas —- Oklahoma State women’s golf brought home its first tournament title of the season on Monday, shooting even par as a team in the final round to end the tournament at 9-under par, two shots ahead of runner-up SMU in the Jim West Challenge at Kissing Tree Golf Club.

Despite the tough playing conditions, the Cowgirls managed to combine for 52 birdies and four eagles, the most among the field.

“This was a nice win for the team to wrap up the fall season,” Robertson said. “They got off to a rough start today but battled back on the last nine holes.

“We’re really proud of the way they hung tough and finished strong. It’s great that they get to enjoy this as they head into the off-season.”

Han-Hsuan Yu led the way for the Cowgirls as she battled the wind and rain well all weekend on her way to finishing in seventh place at 4-under. The result was Yu’s sixth top-10 finish in her last 11 tournaments played. Yu led the field in both par-3 and par-5 scoring, while also sinking 13 birdies, only one behind the tournament leader.

Rina Tatematsu recorded her best finish since the East Lake Cup in October of 2021, finishing in a tie for 11th place at 2-under. Tatematsu took advantage of the par-5’s at Kissing Tree, shooting 5-under on such holes, and her final round 2-under was instrumental in the Cowgirls’ effort to maintain their lead.

Clemence Martin was 8-under on par-5 holes throughout the weekend, a key to her 1-over performance that saw her finish tied for 21st.

Maddison Hinson-Tolchard dominated the front nine at Kissing Tree on Monday, recording five birdies to climb into the top-20 and finish in a tie for 17th. The reigning Big 12 Player of the Year, she was a key cog for the Cowgirls throughout this fall schedule, finishing inside the top-20 at all four tournaments played.

Thitaporn Saithip rounded out the Cowgirls lineup finishing in a tie for 31st at 3-over in just her fourth collegiate event. She provided back-to-back rounds of even-par to close the weekend, while draining nine birdies and a clutch eagle down the stretch of the final round.

The win marks the end of the fall schedule for the Cowgirls, with their next tournament action coming in February at the Nexus Collegiate Invitational in New Providence, Bahamas at Albany Golf Course.

Tulsa finished in sixth place to close out its fall season. The Golden Hurricane posted a 54-hole score of 867  after a final round 291 to finish at 3-over par.

Hurricane freshman Grace Kilcrease had her fourth top-10 finish of the season with a tie for fourth-place performance. She carded a final round even-par 72 for a 5-under par total score of 211.  Senior Lilly Thomas placed 11th with a final total of 2-under par 214 after a 2-under 70 in final round action.

Tulsa concluded the fall season with three top-5 finishes and two tournament victories in five events. The Hurricane will open spring action at the Columbia Classic, Feb. 11-13, at the Duran Golf Club in Melbourne, Florida.

Mikhaela Fortuna and Nina Lang each recorded top-15 finishes and the Sooners finished ninth (9-over, 873).

Fortuna tied for fourth (5-under, 211) and recorded her third round of the tournament under par, finishing 2-under 70. She opened the final round on the 16th hole and recorded her first of four birdies on the 17th hole.

Fortuna moved to 3-under after back-to-back birdies on the fifth and sixth holes. She finished the front nine 1-under 35 and dropped back a stroke on the 13th hole. Fortuna responded with a birdie on her final hole of the tournament.

Lang matched Fortuna with four birdies in the final round, tallying 1-over 73. She tied for 11th and finished 2-under 214. Lang recorded her first birdie of the day on the 18th and drained her second on the fifth hole. She finished the front nine 1-over 37. Lang dropped two strokes in her first four holes of the back nine and moved back to 1-over with her final birdie of the round on the 14th.

Kaylee Vesely finished 1-over 73 and competed as Oklahoma’s lone individual in the field. She tallied four birdies and finished the back nine 2-under 34. Vesely tied for 36th (5-over, 221).