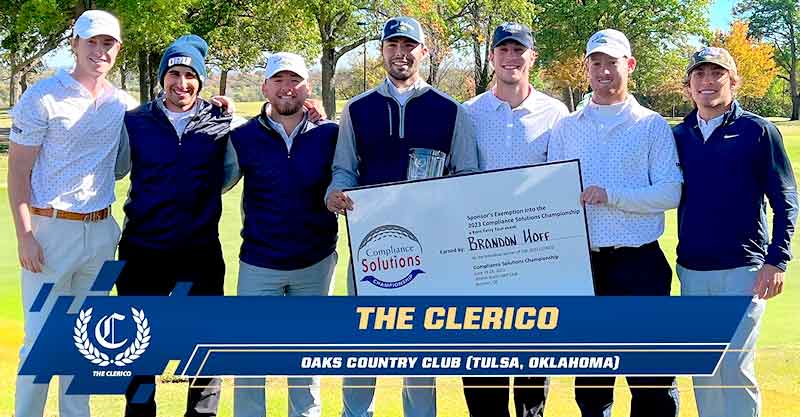 Brandon Hoff of Oral Roberts won a one-hole playoff with Luke Kluver of the University of Oklahoma to win The Clerico at The Oaks Country Club and earn a coveted spot in the 2023 Compliance Solutions Championship on the Korn Ferry Tour.

Hoff shot a final round 3-under 68 to finish at 5-under 137, lifting Oral Roberts into third place in the tournament, three shots behind co-leaders South Florida and New Mexico State. Kluver, one of four Sooners playing as individuals, shot rouonds of 70-67 to also finish at 5-under on the par-71 course. The tournament was shortened from 54 to 36 holes due to heavy rains Monday.

The spot in the June 19-25, 2023 Korn Ferry Tour event at Jimmie Austin OU Golf Course was gifted by Compliance Solutions CEO Mark Lammert, who also is an ORU graduate.

Hoff made a par on the 18th hole in the playoff while Kluver, a transfer from the University of Kansas, made a bogey. Hoff played four years at Baylor before transferring to ORU for his senior season. He should feel right at home at Jimmie Austin, where he shot a 63 in a College Golf Coaches Association event, at the time erroneously reported as a new competitive course record but actually one behind the 62 shot in the final round of the 2012 OGA Stroke Play Championship by Talor Gooch.

Also playing well for ORU in the tournament was Rocco Repetto-Taylor with a tie for 10th at 3-over 145. Lane Wallace tied for 30th at 8-over, Delbert Brooks tied for 37th at 9 over and Jared Strathe tied for 45th at 11-over.