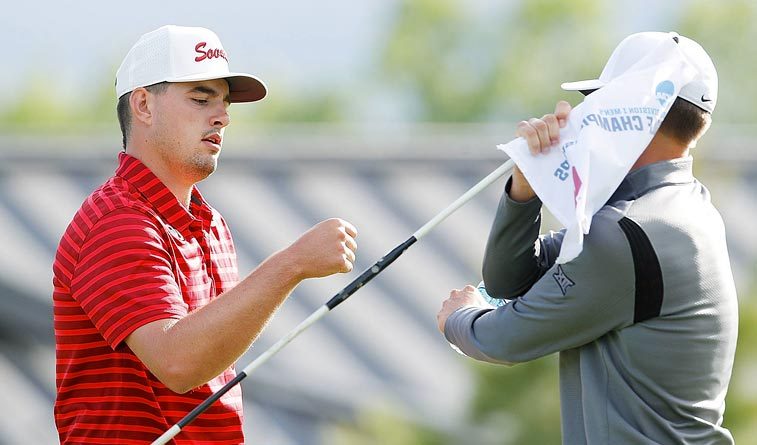 NORMAN – The No. 4 Oklahoma men’s golf team earned its second NCAA Regional win in the last four seasons, claiming a wire-to-wire victory on Wednesday by a single shot over BYU and North Florida to advance to its eighth straight NCAA Championships. The three-day, 54-hole tournament was held at the par-72, 7,452-yard Jimmie Austin OU Golf Club.

The Sooners, who were the No. 1 seed on their home course, posted a 283 (-5) during Wednesday’s final round to win by one stroke with a three-day 850 (-14) against a 14-team field that featured eight teams ranked inside the GolfStat top 50.

OU has now won five regionals in its program history, with the others coming in 1989, 1995, 2001 and 2015. The win also marks the sixth this season and 20th overall under ninth-year OU head coach Ryan Hybl. The Sooners have also won four out of their last five tournaments.

“We accomplished our goal of obviously getting through. Our goal was bigger this week just because we were trying to win on our home track,” OU head coach Ryan Hybl said. “I could actually feel our guys’ stress level a little higher.

“It’s interesting playing at home. We just never really do it because we never host a tournament. It was interesting watching them go through those emotions. We definitely were tighter in some areas. Two of our better players didn’t play great this week. I was really excited for Quade (Cummins), Blaine (Hale) and Garett (Reband). They all three came together and pulled the card for us this week.”

The NCAA Norman Regional was one of six 54-hole preliminary events for the NCAA Championships finals. The low five teams and low individual not on those teams from each regional advanced to the NCAA finals.

Arkansas, with two starters from Oklahoma in Mason Overstreet and Tyson Reeder, rallied with a final-round of 8-under 280 to take the final spot by a shot over Florida State. Reeder shot 71 and Overstreet 73 n the final round, but the Hogs were led by William Buhl with a 67 and Alvaro Ortiz with a 69.

Junior Blaine Hale earned sole possession of fourth place, finishing at 209 (-7). Hale recorded a 73 (+1) during the final round, making par on 17 of 18 holes. Hale’s fourth-place finish mark a season best.

Sophomore Garrett Reband placed 11th overall at 212 (-4) after carding a 69 (-3) during Wednesday’s final round. Reband picked up an eagle on hole No. 8 and had five birdies to record his fourth top-20 finish of the year.

The 30-team NCAA Championships will be held May 25-30 at the Karsten Creek Golf Course in Stillwater, Okla.