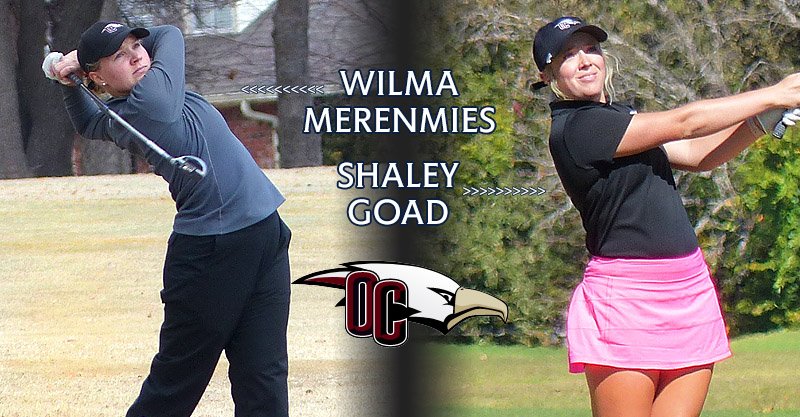 ARLINGTON, Texas (April 13, 2021) – Oklahoma Christian moved in the right direction on the second day of the Lone Star Conference Championship tournament, jumping two spots into a tie for fifth at Texas Rangers Golf Club on Tuesday.

Led by under-par rounds from Wilma Merenmies and Shaley Goad, No. 17-ranked OC posted the fourth-lowest team round in program history – a 2-over-par 290 – and has a two-day score of 589, putting the Eagles in position for a top-four finish heading into Wednesday’s final round.

Merenmies, a freshman from Jyvaskyla, Finland, had five birdies en route to a 2-under 70 on the 6,006-yard course and moved into 15th place in the 74-woman field at 146 (2-over). One shot behind her, tied for 16th, was OC freshman Camilla Jarvela of Espoo, Finland, who posted a 75 on Tuesday.

Goad, a junior from Wheeler, Texas, had three birdies and an eagle on the par-4 No. 8 while shooting a 71. She and OC teammate Abigail Rigsby were tied for 19th at 148. Rigsby, a senior from Courtenay, British Columbia, who was a first-team All-LSC selection, posted a 74 that included three birdies.

Sophomore Alexandria Bennett of Plano, Texas, also shot a 75 and had a two-round score of 153, tied for 35th.

In the final round, OC will be grouped with Arkansas-Fort Smith and Texas A&M International and will tee off starting at 8:50 a.m. With a good finish, the Eagles should secure a bid to the NCAA Division II West Super Regional.