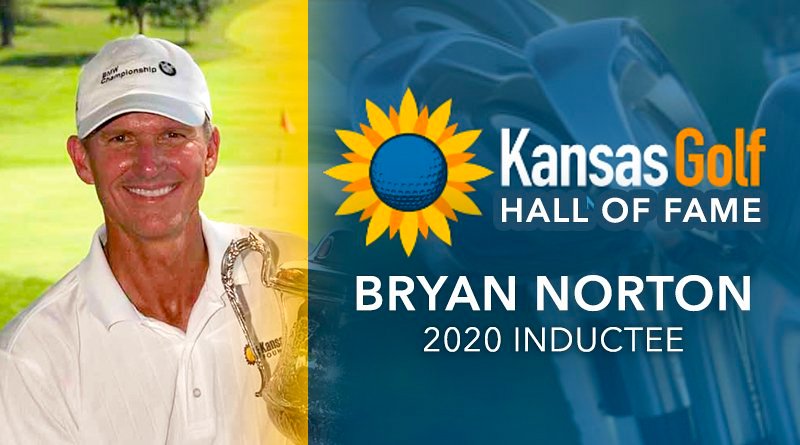 Lawrence, KS. – The Kansas Golf Foundation has selected two honorees for induction into the Kansas Golf Hall of Fame, Class of 2020. Bryan Norton, Mission Hills, Kansas and the late J. L. Lewis, formerly of Emporia, Kansas, will join 44 men and women previously honored for their accomplishments and contributions to the game of golf.
Norton will enter the Hall of Fame in the category of Amateur Player based on his distinguished career. Beginning as a college All American at Oral Roberts University, Norton went on to win the Kansas Amateur Championship in three different decades and three Kansas Senior Amateur Championships. He competed internationally and at home, gaining medalist honors in the 2003 British Mid-Amateur Championship and qualifying for multiple USGA championships. Norton, who was raised in Salina, Kansas, has volunteered his time for the golf community, serving on the board of the Trans Miss Golf Association and as the current President of the Kansas Golf Foundation.
Norton played for coach Bill Brogden on the ORU teams that nearly won the national championship, finishing third in 1980 and second in 1981. His teammates included Bill Glasson, Jim Kane and Joey Rassett.
J.L. Lewis, was born in Emporia, Kansas, graduated from high school there and attended Emporia State University. A lifelong professional golfer, Lewis played at the highest levels. He won twice on the PGA Tour, played on the Nationwide Tour and was a member of the PGA Cup team in 1994, securing the Americans’ victory with a 50-foot putt on the final hole. After his playing career ended, Lewis became a sought-after teacher in his adopted home state of Texas, where he lived until his death in December, 2019. Lewis will be inducted in the category of Professional Player.
Norton and Lewis will be inducted into the Hall of Fame later in the year, and details will be posted on the foundation’s website
The Kansas Golf Foundation, formed in 1991, has as its Mission to “Promote the Future and Preserve the History of Golf in Kansas”. In addition to operating the Hall of Fame, the Foundation provides college scholarships for junior golfers and supports initiatives to introduce golf to students in Kansas schools. More information about the Foundation is available at www.kansasgolffoundation.org.
Facebook Comments