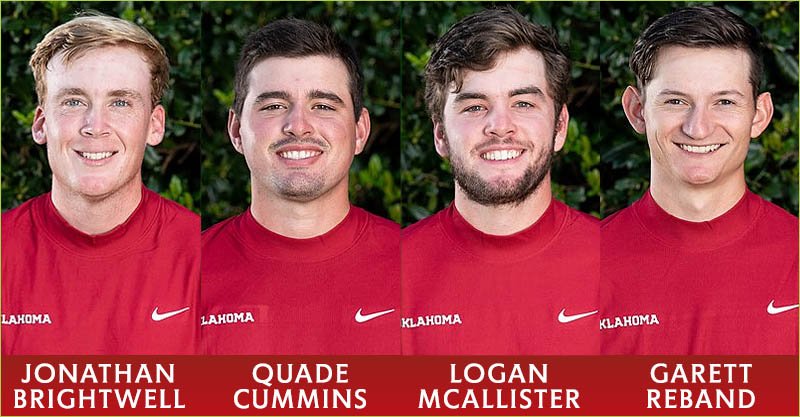 NORMAN – Four Oklahoma men’s golfers were named All-Americans by the GCAA, the organization announced on Monday. The Sooners’ four selections to the first, second or third team were the most in the country.

“Obviously having four All-Americans is a huge accomplishment for our program,” head coach Ryan Hybl said. “I’m so proud of our group for this last season. All four of these guys had moments during the year that were big time for our team, but more importantly, the consistency of this group is what truly stands out.”

For Brightwell, the second-team selection is the second of his career and first as a Sooner after transferring from UNC-Greensboro. The Charlotte, N.C., product led the Sooners with 23 rounds of par-or-better golf, and his 71.31 single-season average was the 11th best at Oklahoma. In addition, Brightwell finished inside the top 10 eight times in 2020-21, including back-to-back top-six finishes at the NCAA Albuquerque Regional and NCAA Championship.

Cummins becomes Oklahoma’s first four-time All-American with his third-team selection to conclude one of the most illustrious Sooner careers ever. The Weatherford, Okla., native posted a 71.39 average this season to finish the year ranked 25th nationally. His play earned him spots on the United States’ Palmer and Walker Cup teams, and his nine top-10 finishes led the team. His career scoring average of 71.34 is the best in program history, as is his 42 rounds in the 60s and 88 par-or-better rounds.

McAllister’s breakout season earned him All-America honors for the first time in his Sooner career. The rising senior opened the year with a win at the Big 12 Colonial Preview and was the Big 12’s September Golfer of the Month. The Oklahoma City, Okla., product was named to the All-Big 12 Tournament Team after a sixth-place finish at the conference championship, and he sunk two holes-in-one at the NCAA Championship to finish 17th. In addition, McAllister was instrumental in the Sooners’ success in match play at the East Lake Cup, Big 12 Match Play Championship and NCAA Championship, as his 9-1 match-play record led the team.

Reband’s third-team selection made him the 10th Sooner all-time to become a three-time All-American and third of the Ryan Hybl era. The York, S.C., product joined Brightwell and Cummins inside the top 15 of the inaugural PGA Tour U rankings and earned his Korn Ferry Tour card by finishing fifth. After missing the fall slate due to injury, Reband burst back onto the scene with a runner-up finish at the Cabo Collegiate and a 201 (-15) to win the Men’s NIT and post the sixth-lowest 54-hole score in program history. He leaves Oklahoma with a career-scoring average of 71.47, second all-time for the Sooners behind Quade Cummins.

The four All-America honors bring Oklahoma’s all-time total to 71 and 23 under Hybl, who took the program’s reins in 2009. Under the two-time Big 12 Coach of the Year in Hybl, the Sooners have appeared in 10 straight NCAA Championships and are the only program in the country to make the last five NCAA match play championships. The four also earned All-America selections from Golfweek, alongside teammate Patrick Welch who earned an honorable mention for the second time.