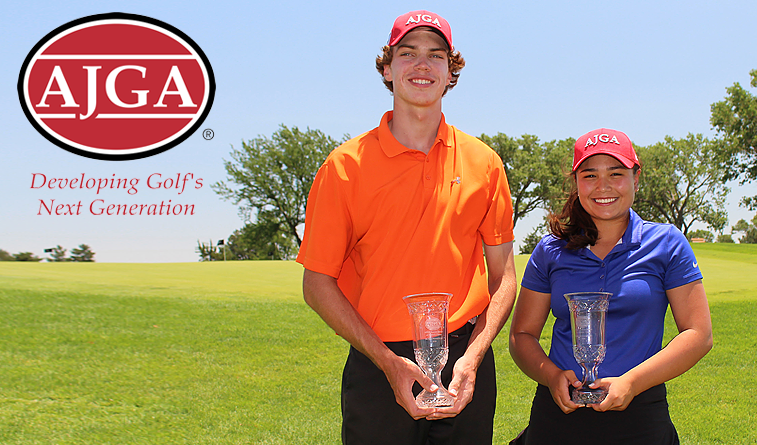 Photo: Jack Glenn of Stillwater, Oklahoma, and Camille Boyd of Shanghai, China, came from behind in the final round to secure their first AJGA victories.

How good is junior golf in Oklahoma? Not one, but two Oklahomans won AJGA events Thursday. Andrew Goodman of Norman shot 5-under to win the Under Armour/Jordan Spieth Championship at Trinity Forest Golf Club in Dallas. And Jack Glenn of Stillwater shot 1-under 215 including three consecutive birdies in his final round, to win the AJGA Kansas Junior at Buffalo Dunes GC in Garden City, Kan.

Luke Morgan of Guthrie was tied for third in Kansas.

Glenn made five birdies in his final round of even-par 72, including one on the 18th hole in which Morgan let him know it was for the win. He overcame a quadruple bogey 8 on the par-4 10th and earned his first AJGA win, edging Ryou Hisatsune of Okayama, Japan, by a shot. Morgan and Cooper Schultz of Wichita, who both play on the Oklahoma Junior Golf Tour, were tied for third at 1 over with Gaven Lane of Argyle, Texas.

Click here to see complete results from the Kansas Junior

Goodman started his final round with an eagle, his second of the tournament, and added four birdies against two bogeys and one double bogey in his final round of 2-under 70, good for a one-shot win over Austyn Reilly of Pottsboro, Texas, who finished at 4-under.