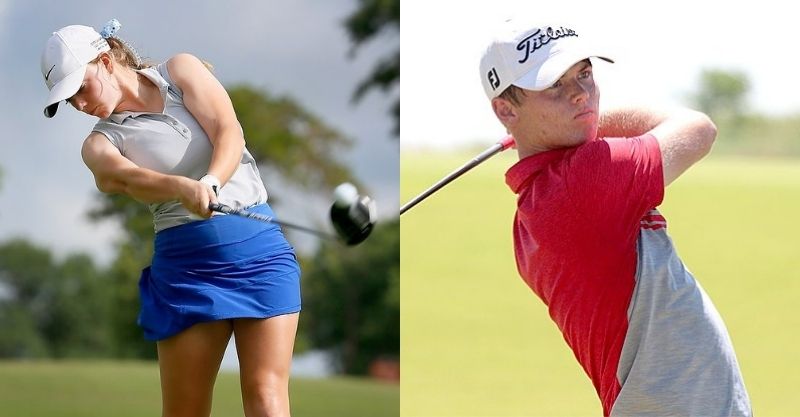 Goodman, after a 7 and 6 rout of Tyler Collier of Broken Arrow in the morning, edged William Sides of Tulsa 1 up in the afternoon quarterfinals.

He will face fellow Norman resident Jake Hopper in the semifinals Thursday morning, Hopper defeated Jack Pfister of Edmond 3 and 2, then survived a 1 up match against Mesa Falleur of Muskogee.

The other semifinal will pit Ryder Cowan of Edmond against Bryant Polhill of Edmond. Cowan took out Cole Luber of Edmond 2 and 1, then took down Ben Stoller of Owaso 3 and 2. Polhill defeated Kyle McLaughlin of Oklahoma City 1 up and then breezed to a 5 and 3 victory over Matthew Smith of Oklahoma City.

In the girls division, Kingfisher’s Kamas rolled to a 6 and 4 win over Ramsey Gunter of Edmond, then survived 1 up against Jaci Hartman of Burneyville in the quarterfinals. She will face Jenni Roller of Jenks in the semifinals. Roller squeaked past Jaden Gregston of Duncan 1 up, then took 19 holes to top Reagan Chaney of Ardmore.

Raychel Nelke of Pocola was dominant in both matches, defeating Aiden Coffelt of Edmond 6 and 4 and Lindyn Ross of Ardmore 6 and 5. She will play Olivia Coit of Edmond, a 6 and 4 winner over McKenna Tatum of Edmond and 5 and 4 over Meghan Charles of Sand Springs.

Although both Kamas and Goodman were repeat champions in the stroke play portion, neither won the match play championship in 2020. The 2020 champions James Roller and Emily Miller are now playing for Texas Tech and the University of Central Oklahoma, respectively.