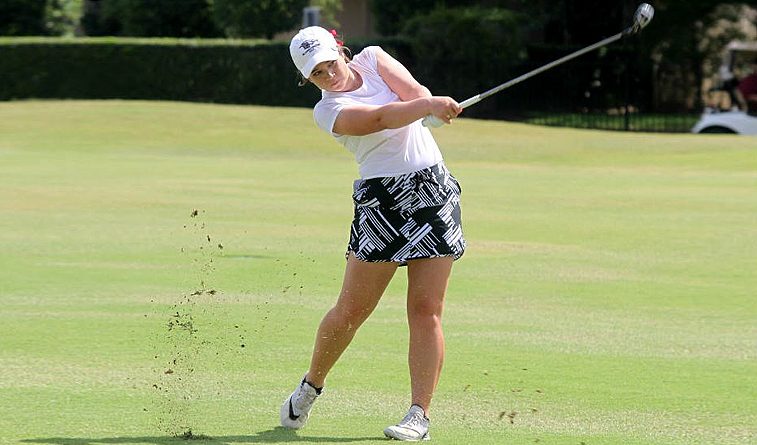 Photo: Kate Goodwin hit a fairway shot on Friday during the third round of the NCAA Division II Championship at Bay Oaks Country Club in Houston.

HOUSTON (May 18, 2018) – On moving day at the NCAA Division II Championship, Oklahoma Christian’s Kate Goodwin moved ever so slightly in the right direction.

Goodwin’s third straight round in the 70s at Bay Oaks Country Club was a 7-over-par 79 on Friday, putting the West Super Regional individual champion in a tie for 51st with a three-round score of 235 (19-over).

She was 7-over two holes later, but closed well for the second straight day, recording a pair of birdies on the par-4 No. 4 and the par-5 No. 7.

The individual leader was Katharina Keilich of Indianapolis (Ind.), who was at 2-under 214. Indianapolis also essentially wrapped up the Division II women’s golf team title, as it will carry a 24-shot lead over Barry (Fla.) into the final round on Saturday.

Goodwin will tee off from No. 1 at 8:30 a.m. Saturday and will be grouped with Amanda Gartrell of Florida Southern and Olivia Sobaski of Central Missouri.