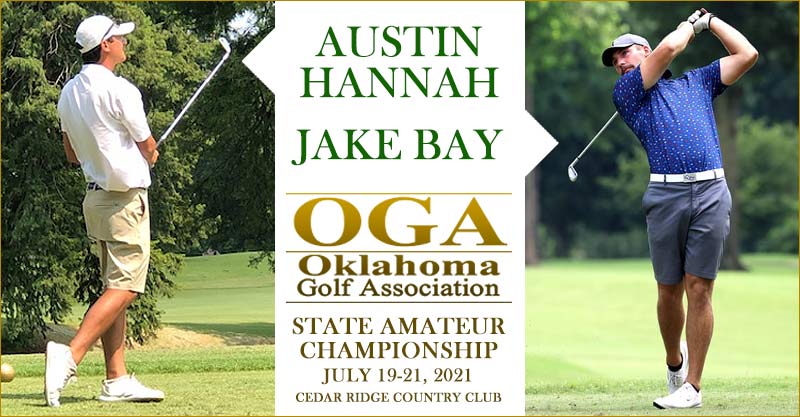 Dylan Teeter of Bixby and Tres Hill of Elk City will be teammates at Oklahoma City University this fall. Wednesday, they could face each other in the finals of the Oklahoma Golf Association State Amateur Championship.

The road to that all-teammate finale is rough, however. Hill will have to get past Austin Hannah, now representing the mid-amateurs at age 34. Hannah, a six-time club champion at The Oaks CC who played collegiately at Oral Roberts from 2005-09, edged Kaden Armstrong of Broken Arrow 1 up in their quarterfinal match when Armstrong made double bogey on the final hole, missing a 3-foot putt for bogey.

Hannah earlier rolled Caleb Price of Edmond 7 and 6 and said he was playing solid golf.

‘I played well in both matches today really,” Hannah said. “In this I couldn’t make as many putts, but I got a big one on 14 (a 10-foot birdie putt that put him back ahead by one after Armstrong had birdied the long par-3 13th).”

Hannah, a two-time OGA Mid-Amateur champion, hasn’t played in the state amateur since 2013 when he made the final eight. He entered this year due to the proximity and his familiarity with Cedar Ridge and said he came in playing well and with confidence “but golf is a fickle game.”

Hill fell behind by three holes early in his match with Phillips, who was 4-under through five holes including an eagle on the par-4 third hole. But he battled back for a tie by the 13th hole and it was nip and tuck from there. Phillips could have closed Hill out but pulled a 2-foot putt for par on the final hole, then made a hash of the par-5 first hole in the playoff while Hill reached it in two and two-putted for the birdie and the win.

Bay, an Abilene Christian golfer from Shattuck, defeated Matthew Smith 3 and 2 in the quarterfinals after a 19-hole victory over Dalton Daniel of Newcastle in morning match.

Teeter advanced with a 20-hole victory over Harley Abrams of Tulsa, then a 6 and 5 thumping of Mesa Falleur of Muskogee in the quarterfinals.

Five matches went to extra holes while four others ended by the 13th hole.