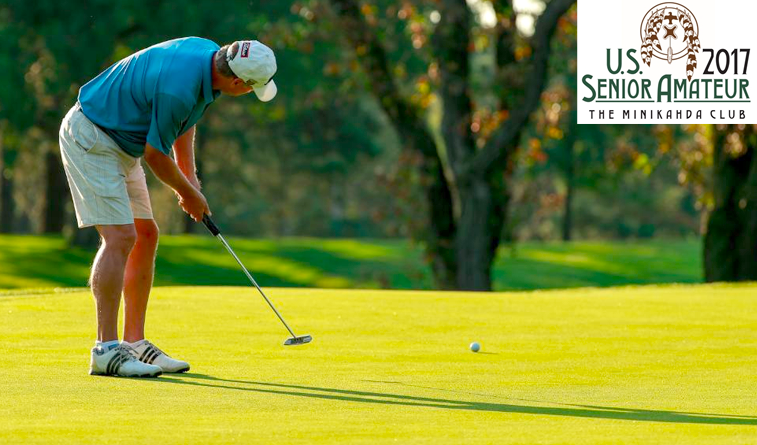 U.S. Senior Amateur champion Chip Lutz in the Round of 16 of the 63rd championship at the par-72, 6,557-yard Minikahda Club. But he did what he had to do, eliminating Lutz for the second consecutive year in convincing fashion to reach the quarterfinal round.

“It’s unfortunate, but if you play well with other former champions, eventually you’re gonna meet,” said Simson, 66, who won this championship in 2010 and 2012. “Chip and I are buddies, but it’s all business when it comes to the competition. You’d cut the guy’s heart out to beat him, and you’ll shake his hand afterwards.”

Defending champion Dave Ryan, who topped Sughrue, 2 up, at Old Warson last September, posted a pair of 2-and-1 wins on Tuesday, over Ronald LaVerdiere in the morning and Michael Hughett of Owasso in the afternoon. He closed out Hughett in the afternoon when both players missed birdie tries from inside 10 feet on the 17th green.

“I didn’t have my best stuff today, to be honest with you,” said Ryan, 63, of Taylorville, Ill., who was helped by an ace on a drivable par 4 in his 20-hole, Round-of-16 win over Simson last year. “It was a little bit of smoke and mirrors. But I hung in there and fortunately I won. I’m going to have to play well [on Wednesday], though.”

Ryan will take on one of the five championship newcomers to make the quarterfinal round. Ken Lee, of Franklin, Tenn., earned a pair of impressive wins on Tuesday, defeating Mark Coward, 4 and 3, in the morning before ousting Bob Cooper, 6 and 5, in the afternoon. Lee pointed to the incoming nine as a favored part of the Minikahda layout, which has hosted a U.S. Open (1916) and a U.S. Amateur (1927) among its five previous USGA championships.

“It’s probably the better part of the golf course for me, because of my length,” said Lee, 56, of holes 10, 11, 12, 13 and 14. “It’s where the golf course stretches out a little bit. Driver becomes a little more critical, and I have been taking advantage of it, playing very well when it counts.”

“Nathan and I are good friends, and I’ve watched him go about his business,” said Knapp, 55. “Even though it’s my first Senior Am, I’ve played in a lot of Mid-Ams and U.S. Ams, and there’s a formula. It’s about playing solid golf and forcing your opponent to make mistakes, and try to not give any holes away. I did a good job of that today.”

For Nocar, 55, the quarterfinal round represents his farthest advancement in a USGA championship, and it guarantees those players of a spot in the field in next year’s championship at Eugene (Ore.) Country Club. Nocar topped Claud Cooper, 4 and 3, in the morning and held off John McClure, 2 up, in the afternoon.

“Making the quarterfinals is pretty special,” said Nocar, who held a 4-up lead before McClure rallied to take the match to No. 18, where he conceded Nocar’s par putt after missing his own. “You try not to think about it, but I got over a couple of shots and started thinking about what it would mean to win, which doesn’t help the outcome.”

Vana, 55, who is competing in his 31st USGA championship, has played at least 18 holes in all three of his matches. He prevailed in 19 holes over Alan Hill in the afternoon, after Hill sank a 35-foot birdie putt to extend the match on No. 18. Vana eliminated 2014 U.S. Senior Amateur runner-up Bryan Norton, 1 up, in the morning, as the players halved the last five holes with par 4s.

Pierce, 55, required 20 holes in the morning to defeat No. 3 Mitch Wilson, then eased past Russ Perry, 4 and 3, in the afternoon.

The winners of Wednesday morning’s four matches, which start at 7:15 CDT, will play at 1 p.m. and 1:15 p.m. for the right to meet in Thursday’s championship match.

“It is nice having been there before,” said Simson, whose previous best finish since his 2012 win was last year’s Round-of-16 loss to Ryan. “You never know when your time is up, and I’ve got to be careful not to have a letdown because I’m playing Matt in the morning. He’s probably got a chip on his shoulder from being runner-up last year.”

As usual, the match promises to be as friendly as it is fierce.

Live scoring and all results at www.usga.org.